By drying out the dung, the beetles increase the availability of oxygen and reduce the amount of methane in the pats 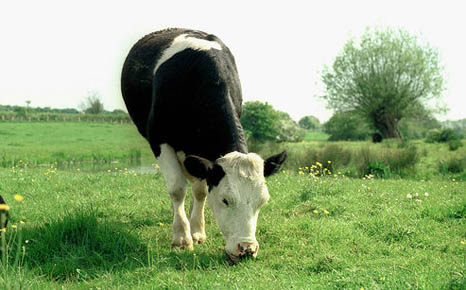 Cattle farming is responsible for 18% of GHGs. (Pic: kevinzim)

Dung beetles can be used to mitigate greenhouse gas (GHG) emissions from cow pats, say researchers from the University of Helsinki.

Dung pats left on fields are a known source of both methane and CO2, but dung beetles have been found to modify the composition of dung by increasing oxygen levels.

“We believe that these beetles exert much of their impact by simply digging around in the dung. Methane is primarily born under anaerobic conditions, and the tunneling by beetles seems to aerate the pats. This will have a major impact on how carbon escapes from cow pats into the atmosphere,” said Atte Penttilä, who undertook the study.

Agriculture and food production have been found to be some of the major sources of greenhouse gases responsible for climate change, with 18% produced by cattle farming.

According to the US Food and Agriculture Organization, agricultural methane output could increase by 60% by 2030. The world’s 1.5 billion cows and billions of other grazing animals emit dozens of polluting gases, including lots of methane.

The beetles were found to enhance the drying of dung pats and increase the availability of oxygen in the deeper parts of the pats, thus reducing the creation of methane.

Researcher Eleanor Slade, said, “Overall, the effects that we found are intriguing, but the implications also quite worrying.

“When you combine the current increase in meat consumption around the world with the steep declines in many dung beetle species, overall emissions from cattle farming can only increase.”