Uncertainty over future maize and wheat production alarms some analysts, but it’s not all bad news 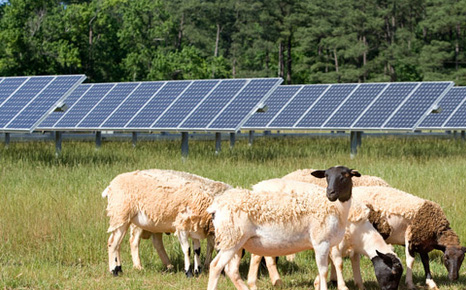 Agriculture can help itself by investing in renewable energy and cutting its carbon emissions. (Source: SAS)

Climate scientists have predicted maize and wheat yields could fall by 19-30% by 2065, a disparity which has now been solved by researchers at Princeton University.

It’s a hugely important issue, as maize and wheat are staple foods for up two-thirds of people around the world.

The report in the journal Global Change Biology is one of the first to compare the agricultural projections generated by two different models – empirical, from field observations, and mechanistic, from laboratory tests.

Under the hotter, wetter conditions projected by the climate scenarios they used, the empirical model estimated that maize production could drop by 3.6 %, while wheat output could increase by 6.2%. Meanwhile, the mechanistic model calculated that maize and wheat yields might go up by 6.5 and 15.2%, respectively.

It offers more evidence that empirical models show greater losses as a result of climate change, while mechanistic models may be overly optimistic.

“A yield projection based only on empirical models is likely to show larger yield losses than one made only with mechanistic models. Neither should be considered more right or wrong, but people should be aware of these differences,” associate research scholar Lyndon Estes said..

Although agriculture is acknowledged to provide the primary source of livelihood for many people, it is also reported to cause up to one third of all anthropogenic greenhouse gas emissions, according to researchers.

A significant portion of these emissions come from methane, which, in terms of its contribution to global warming, is 23 times more powerful than carbon dioxide.

According to the US Food and Agriculture Organization agricultural methane output could increase by 60% by 2030. The world’s 1.5 billion cows and billions of other grazing animals emit dozens of polluting gases, including lots of methane.

Speaking to RTCC Dr. Jonathan Scurlock, chief adviser to the National Farmers’ Union of England and Wales, said it was important to be aware of the whole picture.

“There is a tendency to blame the whole of food production for being a significant source of GHG emissions because if you actually drill down into the details, agriculture is responsible for 8.5% of the UK’s greenhouse gas emissions.”

But he made it clear that the sector was not averse to the idea of making changes in order to mitigate climate change.

“The agriculture industry as a whole does take responsibility for its greenhouse gas emissions – we have negotiated with government ambitions for reducing our contribution to the national greenhouse gas budget,” said Dr Scurlock.

He said the simplest solution would be to switch from burning fossil fuels to low carbon energy, but before that, changes to farming practices need to be made.

“If we want to eat we want to be able to grow crops. What we can try and do is be more efficient in the way we manage agriculture and more efficient perhaps through clever genetics, gradually making crops more nitrogen efficient to reduce that down to a minimum figure – same thing with methane from ruminants to animals.”