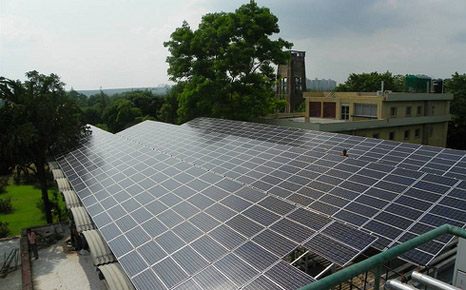 Panels on rooftops could be a regular sight in Delhi if Greenpeace assumptions are correct. (Source: vm2827)

Delhi could break the 2GW solar power barrier by 2020 due to plummeting costs, extensive roof space and the rising demand for electricity say Greenpeace.

According to a report co-authored by Indian think tank Bridge to India, solar installations would only need 1.6% of space in a city where land is expensive to provide enough energy to the city’s 17 million residents.

A growing middle class is demanding more and more energy which the main electricity providers are currently unable to meet. Delhi’s peak power demand has increased from 3,097MW in 2002 to 5,642MW in 2012.

Furthermore, the Indian government’s diminishing support for rooftop solar is now irrelevant because the report demonstrates how this can be achieved without administrative support.

“This may sound bold when compared to the reality of existing solar installation in leading cities such as Berlin (98MW), New York (14MW) or San Francisco (23MW) or the overall achievement of 1.5 GW in India as a whole until mid-2013,” said Dr. Tobias Engelmeier, managing director of Bridge to India.

“However, it is not so bold, if we assume that the landscape of power supply is changing fundamentally: grid power prices continue to rise and the power supply deficit in India is widening.”

The report states that solar power can help the city to increase its energy security and limit consumer power price rises.

Furthermore, according to the World Health Organization, Delhi is the 12th most polluted city in the world.

The report calls on the government to take steps in shifting to cleaner energy to distance itself from this reputation.

“It is important for the government to make a gradual shift to a cleaner source like solar to improve the health parameters of its residents,” said the report.

“Solar could give the city the room for manoeuver that it needs to shut down the heavily polluting, coal fired power plants within the city.”

Hari Manoharan, analyst at RESolve Energy Consultants told RTCC: “There is a lot of rooftop area available for solar applications in India.

“That being said, currently, rooftop is still a distant second to ground based installations in India.”

Ground-mount installations are propped up by central government policies like the Jawaharlal Nehru National Solar Mission (JNNSM) and the Gujarat Solar Policy.

The report expects these policies to facilitate an additional installation of over 6GW in the next four years.

A similar incentive scheme for rooftop solar was abandoned last year due to concerns of corruption.

“Several loopholes were identified in it which could result in scams,” a senior government official told The Economic Times.

“It would be impossible to keep a tab on solar capacity on each roof-top and if someone produced power from cheap polluting diesel generator sets and fed that into the grid, we would never get to know. The difference in cost between solar power and that generated by fuel is massive. We will have to look at alternative schemes now.”

“Rooftop and decentralised generation would be preferable in India as a short term solution to easing grid congestion as well as minimising losses associated with transmission of electricity.”

The Delhi government is already getting in on the act with plans for a 5MW solar installation at the secretariat.

However, India’s reputation as a solar hub has been tainted by getting embroiled with China, Malaysia, Taiwan and US solar manufacturers. The US has now lodged its own complaint with the World Trade Organisation.

Greenpeace remains optimistic: “We foresee two major growth periods: one between 2014 and 2017 when the government buildings go solar and one between 2018 and 2020, when residential installations will come into the market.”

Dr. Engelmeier said: “We believe that going solar is not so much a choice but an inevitability for Delhi. It will be driven by the increasingly favorable economics of solar and by customer demand. Entrepreneurs will develop business models to serve Delhi’s power consumers as long as there are no regulatory hurdles placed in their path.”