The €12 million project, located in Spain, is the largest of its kind 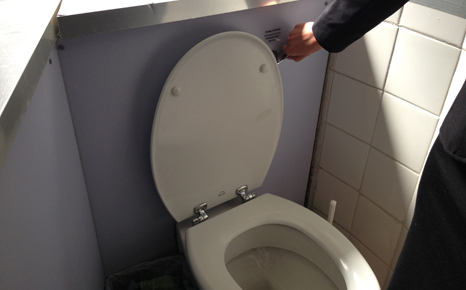 One toilet flush could power 200,000 cars in Spain

Low cost biofuel from algae grown in wastewater from toilets has been successfully harvested to produce clean energy.

The site where the algae biomass is being produced, based in Ciclana in Southern Spain, is the world’s largest, equivalent in size to ten football pitches. It is owned by the water company FCC Aqualia.

The All-gas project has cost a total of €12 million, with €7.1 million from the European Union.

“The All-gas project is going to change the face of wastewater treatment by generating a valuable energy resource from what was previously considered undesirable waste.”

By using wastewater for this €12 million five-year project it avoids the controversy that surrounds other biofuel projects, which are based on large-scale food crops. Food-based biofuels have been criticised for raising food prices as well as having an adverse environmental effect.

The All-gas system is self-sufficient as it runs on the energy it produces. It is part of an integral water management system.

The biomass obtained from the algae shows a particularly high energy potential relative to its digestibility level.

It has a methane production capacity of around 200-300 litres of gas per kilogram of biomass processed by anaerobic digestion. The microalgae also allow the purification of wastewater to a high standard.

Car manufacturer Rolls Royce has also invested in replacing kerosene with algae as an aviation fuel within the next two decades. The engine has been estimated to be able to produce 75% less carbon dioxide than today’s plane.

Launched in May 2011, the project is expected to have generated enough energy to power 200,000 vehicles by 2016. When the project reaches its demonstration phase, the biogas produced will be used to power public buses and garbage trucks in the region of Cadiz.

In recent years, the European Union has made a decisive commitment to pursue new sources of clean energy. The current aim is that 20% of the energy produced in Europe will come from renewable sources by 2020.

In this context, the €12 million All-gas project, with EU funding of €7.1 million, can be considered a global benchmark.

As Nicolas Aragon, Chiclana’s environmental councillor, explains: “This is not only an R&D project, but also a way of reducing costs and investing in the protection of our natural environment. Chiclana is a worldwide tourist destination and from now on, we will show that along with attracting visitors with our sunshine and beaches, we can also grow sustainable biofuel with our natural resources. ”