North Pole is still frozen say researchers, after erroneous pictures of a ‘lake’ appeared on a number of news outlets 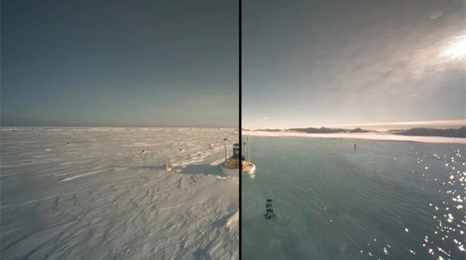 Pictures of Arctic lake at pole were 375 miles off mark say team at North Pole Environmental Observatory, who catalogue photos

This summer’s Arctic sea ice melt could still rival the 2012 record low, but fears the North Pole is underwater have proved unfounded.

Pictures of a lake at the Pole appeared in the Huffington Post, Sun and Daily Mail newspapers last week, raising concerns of an accelerated sea ice collapse.

But researchers monitoring a series of buoys moored in the Arctic circle say the pictures were taken 375 miles south of the Pole, adding that the pictured melt water is not unusual.

“Every summer when the sun melts the surface the water has to go someplace, so it accumulates in these ponds,” said Jamie Morison, a polar scientist at the UW Applied Physics Laboratory and principal investigator since 2000 of the North Pole Environmental Observatory.

The buoys record weather, ice, and ocean data, and the webcams transmit images via satellite every 6 hours. 10-15 are planted on an annual basis by the US National Science Foundation.

The one in question had been planted 25 miles from the Pole, but sea ice movements over the winter took it far off course.

Last summer the sea-ice hit a record low in extent since measurements began in 1979.

This year the melting started a bit later than usual, Schweiger said, but picked up in the last couple of weeks. Late summer is usually the strongest period of shrinking because the ice is already thin.

“I think it’s going to be pretty close to last year,” Morison said.

“Up in the Canada basin the ice looks like Swiss cheese, with lots of holes. Even though the ice extent is pretty good, our thinking is that if there’s a big storm event we’re going to see a rapid breakup of that ice and it’s going to disappear pretty quickly.”

“While the hoopla about Santa’s swimming pool was off the mark,” Morison said, “it is the long-term observational record from these buoys that provides the perspective needed to understand what really is going on.”