Sea ice at the Arctic has shrunk to its lowest seasonal minimum since satellite records began.

Environmental groups and scientists say this is the strongest indication yet that climate change is warming the planet.

“We are now in uncharted territory,” said Mark Serreze, director of the National Snow and Ice Center (NSIDC) in Colorado, US.

“While we’ve long known that as the planet warms up, changes would be seen first and be most pronounced in the Arctic, few of us were prepared for how rapidly the changes would actually occur.” 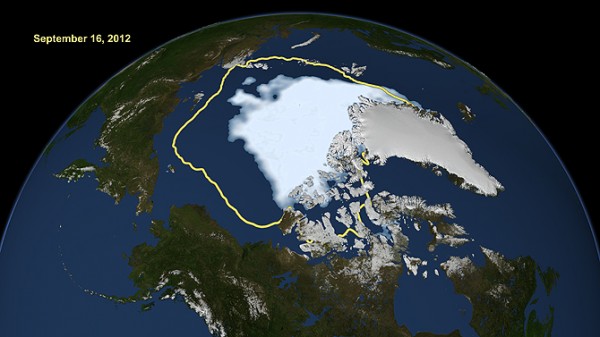 NASA: Data reveals how Arctic sea ice extent, from Sept. 16, 2012, compares to the average minimum over the past 30 years (yellow).

Arctic sea ice cover grows each winter as the sun sets for several months, and shrinks each summer as the sun rises higher in the northern sky.

Each year, the Arctic sea ice reaches its minimum extent in September. According to NSIDC this year’s minimum follows a record-breaking summer of low sea ice extents in the Arctic.

Scientists warn that this melt is not a one-off phenomenon but is more likely to represent a long-term retreat of summer sea ice as a consequence of climate change.

“A wider impact may come from the increased heat and moisture the warmer Arctic is adding to the climate system,” NSIDC lead scientist Ted Scambos said.

“This will gradually affect climate in the areas where we live, we have a less polar pole — and so there will be more variations and extremes.”

A word of caution on this new data comes from a 2009 article on the UK’s Met Office website, which stresses that a variety of factors can affect Arctic sea ice – taking the previous minimum in 2007 as an example.

“Arctic weather systems are highly variable year-on-year and the prevailing winds can enhance, or oppose, the southward flow of ice into the Atlantic. Consequently, the sea ice has not declined every year, but has shown considerable variability – both in extent and thickness,” it states.

However, scientists appear to agree that the rapid decline of the ice this summer is the sign of an unprecedented thaw that has confounded polar experts.

“Climate models have predicted a retreat of the Arctic sea ice; but the actual retreat has proven to be much more rapid than the predictions,” said Claire Parkinson, a climate scientist at NASA Goddard Space Flight Center, Greenbelt, Md.

“There continues to be considerable inter-annual variability in the sea ice cover, but the long-term retreat is quite apparent.”

Arctic sea ice has reached its minimum level for 2012, according to satellite data: a new record low. go.nasa.gov/S7QK9E