The company claims its panels generate enough power for almost 2,000 houses, which could cover 35 football pitches 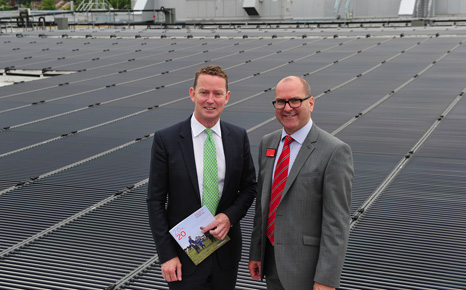 UK retail giant Sainsbury’s says it has now installed 100,000 solar panels at over 200 of its stores around the country.

This confirms its place as Europe’s leading solar operator, and is part of the company’s wider plans to reduce operational carbon emissions by 30% absolute (and 65% relative) by 2020 compared with 2005.

The heat wave the UK has experienced these past few weeks helped Sainsbury’s generate enough electricity to power 66 homes for a year (circa. 555,168 kWh), 27 more than the same time last year.

These will help reduce its total CO2 emissions by an estimated 9,785 tonnes per year as it retains its status as the largest multi-roof solar panel operator in Europe.

“We’ve achieved a 9.1% absolute reduction in electricity use over the past four years in our supermarkets, despite a 25% increase in space, and we’re really seeing the benefits from using our underutilised space for solar panels, and from the other renewable technologies we’ve installed,” said Paul Crewe, Sainsbury’s head of engineering, sustainability, energy and environment.

“We believe they are fundamental to the sustainability of our business and there is a strong commercial case for using each technology. They are helping us cut carbon emissions and energy bills and achieve the environmental targets we set ourselves in our stretching 20×20 Plan.

“It’s good news for the environment and is supporting job creation in the UK’s renewable energy sector.”

The roll out of Ground Source Heat Pumps at 12 stores follows Sainsbury’s successful world-first use of the geothermal technology at its Crayford store, enabling it to supply 30% of its energy from on-site renewable sources.

It has also installed 74 biomass boilers since 2008, which use wood pellets – a renewable resource – to heat stores rather than using fossil fuel-based gas.