The issue of climate-induced migration, and its impacts on human health and wellbeing, is often underplayed in discussions about climate change.

But the ramifications of failing to prepare with increased levels of migrants at an international level will be huge.

According to the International Organisation for Migration and United Nations figures, between 200 million and 1 billion people could be forced to leave their homes between 2010 and 2050 as the effects of climate change worsen, potentially inundating current response strategies.

More to the point, climate change migration is already happening across the world – right now. 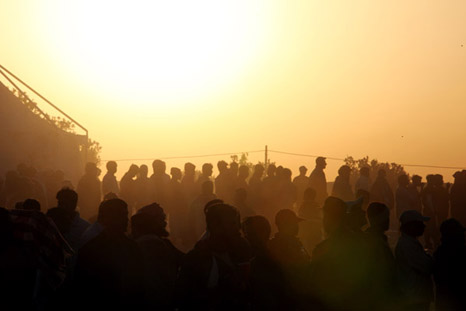 Migrants at the Libya-Tunisia border. The Arab Spring was in part a reaction to climate induced resource shortages (Source: UN Photo/OCHA/David Ohana )

Some are migrating because of the direct impacts of natural disasters like floods, droughts and acute water shortages, which have been particularly severe in Africa and small island states.

Equally or perhaps more importantly in the longer term are indirect impacts such as conflict and increases in food prices, which can also contribute to people’s decision to leave their homes.

There is no doubt that forced migration due to climate change will increase the pressure on existing infrastructure and urban services, especially in sanitation, education and social sectors and also consequently increase the risk of conflict over access to scarce resources, even among migrants.

A study released in November 2012, Where the rain falls: climate change, food and livelihood security, and migration, reveals a much more nuanced relationship between projected climate variability and migration, which could provide key insights into likely drivers of migration in the coming years.

The study, carried out by Care International and the UN University, in eight countries in Asia, Africa and Latin America, revealed that in nearly all instances in which rains have become too scarce for farming, people have migrated, but mostly within national borders.

At a side event at the Doha climate talks, one of the authors, Dr Koko Warner, head of environmental migration at the UN University, remarked: “Those resilient households use migration to reduce their exposure to climatic variability [and] to invest in even more livelihood diversification, education, health and other activities that put them on a positive path to development.”

However, there are also much starker consequences for more vulnerable households.

Households may migrate in an attempt to manage risk but suffer worse outcomes. They are often found in countries with less food security and fewer options to diversify their incomes. They move within their countries seasonally to find work, often as agricultural labourers.

The study also described how migration could be an ‘erosive coping strategy’; as a matter of human security when few other options exist. These households are found in areas where food is even scarcer. They often move during the unpredictable dry season to other rural areas in their regions in search of food or work.

Lastly, the study found “households that are trapped and cannot move, and are really at the very margins of existence”. These households do not have the capacity to migrate.

Health policy making in the context of migration can either been seen as a human rights issue, putting the needs of the individual first, or as a security issue, in terms of its threats to public health (communicable disease control for example) and social stability.

The latter approach relies principally on monitoring, surveillance and screening, and could be argued to be the modern-day cousin of centuries-old quarantine measures, without an individual-focused perspective.

The human-rights based approach takes into account nuances and special needs of individuals, as well as the social determinants that may have affected individuals’ health along the migratory pathway.

With respect to the UNFCCC process, the response to environmental migration is an area that is particularly underdeveloped.

The negotiating text elaborated at Tianjin in 2010 invited Parties to enhance adaptation action under the Adaptation Framework through: measures to enhance understanding, coordination and cooperation related to national, regional and international climate change induced displacement, migration and planned relocation, where appropriate.

The Cancun agreement at the UN climate talks in 2010 took some strides forward and laid out a roadmap for progress with reference to migration, but as yet it hasn’t been implemented, and highlights the need for better and more equitable policy at a global level.

Migration law specialist Jane McAdam observes: “Finally – and perhaps most significantly – there seems to be little political appetite for a new international agreement on protection. As one official in Bangladesh pessimistically observed, ‘this is a globe for a rich man’.”

In Migration and Climate Change, a recent publication by UNESCO, Stephen Castles, Associate Director of the International Migration Institute at the University of Oxford suggests that we may need to re-think our strategy.

“The doomsday prophesies of environmentalists may have done more to stigmatize refugees and migrants and to support repressive state measures against them, than to raise environmental awareness,” said Castles.

We should be doing more, much more, to understand and to raise awareness of climate-induced migration, and we must start preparing to cope more effectively with the health risks associated with it. Now.

Jonny Elliot is a member of Healthy Planet UK