Over 30 million people lost their homes due to weather and climate induced disasters in 2012, with the USA surprisingly suffering more than Bangladesh.

A new report by the Internal Displacement Monitoring Centre (IDMC) found 32.4m people were forced to migrate last year with 98% of those moves linked to floods, droughts and storms.

Hurricane Sandy displaced 776,000 people in the US, 343,000 in Cuba and smaller numbers in other parts of the Caribbean. Two monsoon periods in India affected a combined 8.9m people. Flooding in Nigeria forced more than 6m people from their homes during the autumn.

“In countries already facing the effects of conflict and food insecurity such as in Nigeria, Pakistan, and South Sudan, we observe a common theme,” said Clare Spurrell, chief spokesperson for IDMC.

“Here, vulnerability to disaster triggered by floods is frequently further compounded by hunger, poverty and violence; resulting in a ‘perfect storm’ of risk factors that lead to displacement.″ 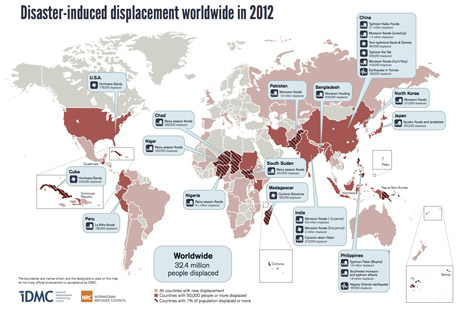 The USA is more resilient to natural disasters than many of the other affected countries and less people were directly affected by Sandy than other events.

Despite this, the political ramifications of Sandy proved to be greater, raising awareness of the threat of climate change and thought by some to have swung the result of the US election.

Lord Stern, author of the influential Stern Report on the economic impact of climate change, told The Guardian that the problem could get much worse if temperatures increase in line with CO2 emissions.

“Hundreds of millions of people will be forced to leave their homelands because their crops and animals will have died,” he warned.

“The trouble will come when they try to migrate into new lands, however. That will bring them into armed conflict with people already living there. Nor will it be an occasional occurrence. It could become a permanent feature of life on Earth.”

Both the UK and the USA have identified climate change as a significant security threat as tensions over land and resources increase.

With efforts to reduce emissions flagging, and finance for adaptation projects hard to come by many of the worst hit nations have turned their attention to a loss and damage mechanism, to help them deal with the impacts of climate change.

Video: International Organisation for Migration on the growing impact of climate change