Climate change was back in the spotlight for the Russian media last week, with doomsday-style predictions of more extreme weather events, rapidly warming Arctic and growing global average temperatures.

While some of those stories are invariably generic, others boast frightening numbers, albeit without all that boring stuff like scenarios, confidence levels and uncertainty, or even where the data was taken from.

The secret is not in the sauce but in the source.

If you decide to find out which ministry is responsible for climate change issues in Russia by googling “climate change ministry” in the appropriate language, the results might be surprising, scary, misleading and thought-provoking at the same time. 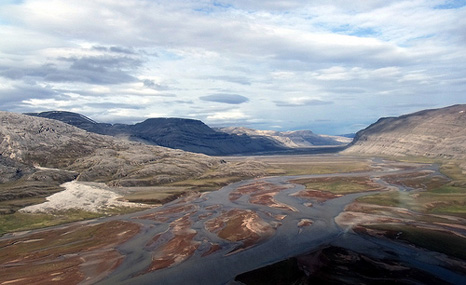 Permanently frozen soil (Permafrost) covers about 63% of Russia. As much as a third could be gone by 2050 (Flickr/subarcticmike)

How’s that, you ask? Well, because the ministry that’s most publicly active and articulate about the dangers of climate change is Emercom, the Ministry of Emergency Situations.

If that’s not impressive enough, it’s officially known as the Ministry for Affairs for Civil Defence, Emergencies and Elimination of Consequences of Natural Disasters.

Are we talking about a department of the Russian government – the same government that’s known for its procedural interventions, Kyoto opt-out and ‘The Great Concerns over Growing Level of Legal Nihilism?’?

The vigilant ministry constantly keeps track of what it considers threats to the country’s wellbeing – and possible sources of more work for them.

It has an analytical centre designed specifically to monitor and assess these threats, and this center casually starts every year with a forecast.

Then, you just have to connect the two remaining dots. One, Russia is a truly HUGE country stuck between desertification in the south, thawing permafrost in the north, water quality issues in the west and hurricanes in the east.

Two, the grimmer our future looks, the more money Emercom can ask for.

And that can be a hell of a lot of money considering that same forecasts estimate yearly losses and damages from various emergencies, including those that can be linked to climate change, at up to 2% GDP, or 900 billion roubles (around $30 bln).

And yet, according to WWF Russia’s Alexey Kokorin, this time the ministry that can occasionally beat Greenpeace at alarmism, was “unfortunately, not really pessimistic in its forecasts”.

Kokorin notes that most of the scenarios Emercom cites are rather moderate, and overall the ministry managed to get its facts right – background facts, that is.

Nevertheless, that cloud of non-news has a silver lining after all. The level of general environmental awareness and interest in climate change matters in Russia is incredibly low – we are talking “no one cares” low.

Thus, anyone willing to sell the 101-level basics as news and having the means to get mainstream media to report on that is in fact doing the world a great service.

Because, simply put, for quite a lot of Russians, this is indeed breaking news.