Eating the Andean crop Quinoa could bolster food security, protect farmer’s livelihoods and set the world on a path to zero-hunger, according to the head of the UN’s Food and Agriculture Organisation (FAO).

Speaking as the FAO launched a global year of quinoa, José Graziano da Silva said the crop could prove to be a potent weapon against hunger at a time when increasing climatic variability is making conditions increasingly difficult for small farmers.

“We are here to recruit a new ally in the fight against hunger and food insecurity – quinoa,” said da Silva.

“The International Year of Quinoa will serve not only to stimulate the development of the crop worldwide, but also as recognition that  the challenges of the modern world can be confronted by calling on the accumulated knowledge of our ancestors and the small family farmers who currently are the major producers of the crop,” he said. 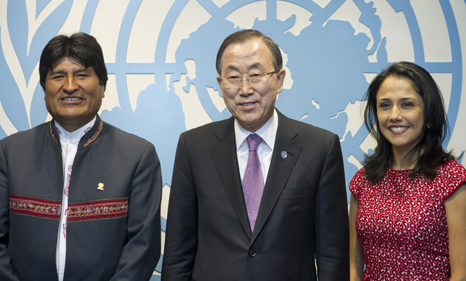 The UN hopes to spread the production of the drought resistant “super food” to communities across Africa as well as in the Himalayas, parts of northern India, the Sahel, Yemen and other arid regions.

“This extraordinary grain has been a cultural anchor and a staple in the diet of millions of people throughout the Andes for thousands of years,” UN Secretary-General Ban Ki-moon said. “Quinoa is now poised for global recognition.”

Agriculture is responsible for a growing volume of emissions particularly as emerging economies increase the amount of carbon intensive meat in their diets.

Greenhouse gas emissions related to cattle come from several sources including the loss of forests cleared for their pastures, fertilisers, feed, transport and of course from the animals themselves.

Quinoa, which looks similar to a cereal grain but is actually a seed of a plant more closely related to spinach.

Drought severely reduced maize yields in the US in 2012 while a wet summer in Europe saw many potato crops rot in the ground, driving up prices.

“Quinoa is an ancestral gift of the Andean people,” said Bolivian President Evo Morales, one of the FAO Special Ambassadors for the International Year of Quinoa, along with Nadine Heredia Alarcón de Humala, First Lady of Peru.

Quinoa’s resilience in a variety of conditions could make it a safer bet for some farmers than their traditional crops.

Some businesses, including Starbucks, have sought to protect their supply chains by helping farmers in developing nations to adapt to changing growing conditions.