Another typhoon has barreled across the Philippines and made landfall at the southern tip of Davao del Sur in Mindanao.

Less than 100 days ago the area was blasted by Typhoon Bopha, the worst storm in the region’s history. Its early days but least one casualty has already been confirmed in Compostela Valley.

Mindanao is considered remote and at times dangerous and everyone knows that the Philippines is prone to typhoons.

But it was shocking nonetheless to see how Bopha (known locally as Pablo), the world’s deadliest typhoon in 2012, which killed 1,067 people and left over 800 still missing, garnered few of the dramatic headlines of hurricane Sandy in New York.

The impact however was enormous across the region; a quarter of the Philippines’ entire banana crop blasted, vast areas of coconut trees turned to matchsticks and along with it the livelihoods of a poor and sometimes restive region. 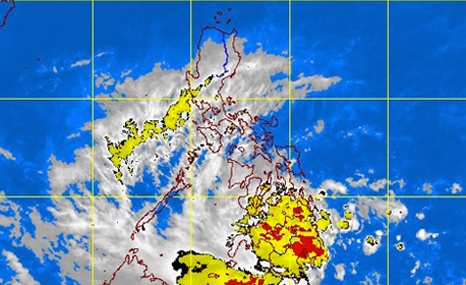 As Simon Tisdall, foreign affairs columnist for The Guardian (and one of the few foreign journalists to have taken the trouble to visit Mindanao) wrote this week: “More than 6.2 million people were affected; the cost of the damage may top $1bn.

As a category 5 storm (the highest), Bopha was significantly more powerful than hurricane Katrina (category 3), which hit the US in 2005, and last year’s heavily publicised hurricane Sandy (category 2).”

Tisdall points out that with an estimated 216,000 houses destroyed or damaged, tens of thousands of people remain displaced, presenting a challenge for the government and aid agencies, including IOM.

He goes on to say that “the lack of international media coverage of Bopha may in part be explained – though not excused – by western-centric news values, and in part by the high incidence of storms in the Pacific region.”

But the burden of Tisdall’s piece is that Bopha, (and now Tropical Depression Crising as well,) are harbingers of dramatic climate change in a part of the world that has rarely if ever experienced typhoons.

“The Philippines experiences an average of 20 typhoons a year (including three super-typhoons) plus numerous incidents of flooding, drought, earthquakes and tremors and occasional volcanic eruptions, making it one of the most naturally disaster-prone countries in the world,” he notes

“But more disturbing than Bopha’s size was the fact that it appeared to reflect rapidly deteriorating climatic trends.”

He interviewed Mary Ann Lucille Sering, head of the Philippine government’s climate change commission, who underlined the deepening crisis. Typhoon-related costs in 2009, the year the commission was created, amounted to 2.9% of GDP, she told Tisdall, and have been rising each year since then.

“Extreme weather is becoming more frequent, you could even call it the new normal,” Sering said.

“Last year one typhoon [Bopha] hurt us very much. If this continues we are looking at a big drain on resources.”

Human activity-related “slow onset impacts” included over-fishing, over-dependence on certain crops, over-extraction of ground water, and an expanding population (the Philippines has about 95 million people and a median age of 23). 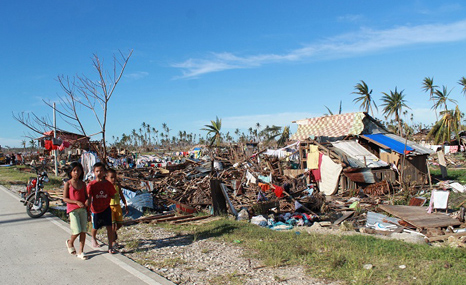 Destruction caused by Typhoon Bopha in Baganga, Davao Oriental (Pic: Save The Children)

IOM’s Philippines mission, along with the humanitarian community is hard at work delivering shelter, health and other assistance for the displaced.

But as I saw on a recent field visit, the needs are enormous and there are not enough resources to meet them.

Thousands of families still take refuge under plastic sheets that degrade under the constant strong winds and torrential rains that has been battering the region since Typhoon Bopha landed.

In an election year, there are real concerns about the potential for social instability should a lack of information or rumor cause people to feel abandoned and lose hope.

As is now widely accepted, delivering timely and accurate information to people who have survived a disaster is a form of humanitarian assistance.

The concern is that otherwise, people who have already lost everything can readily become frustrated, angry and lose perspective. If they do not receive clear and timely information that their needs will be met, it could further complicate relief efforts.

It’s also a given that all communication must be two way and that communities must be able to ask questions, provide feedback, make complaints and air their views on all aspects of aid and plans for reconstruction.

These principles have been drawn up by the network known as Communicating with Disaster Affected Communities (CDAC) of which IOM is a member. In Mindanao, IOM is playing a leading role in rolling out a communications platform in support of the government’s emergency response.

The sort of activities being carried out make so much sense that it’s odd to reflect how new this systematic approach is to emergency response by the humanitarian community.

They include making assessments of the media and communications of affected areas; providing careful answers to frequently asked questions; working with local media through briefings; helping with weather reports and early warnings; and generating social media to help push information to communities.

IOM Philippines has also taken a leap in developing an opensource crowdmapping tool to both generate and manage feedback  from the affected communities, humanitarian partners and private donors.

Reports are made through texts, calls, emails and even social media networks such as Facebook and Twitter hashtags.

They are moderated and catalogued before posting and urgent alerts get a quick response.

The reports can be accessed through the website https://bopharesponse.crowdmap.com.

Leonard Doyle is head of online Communications at the International Organization for Migration – this article first appeared on the IOM website.

RTCC VIDEO: Dina Ionesco from the International Organisation for Migration explains why climate change will cause migration levels to increase