The year started with a controversial decision from the EU to include aviation in its ETS (Source: chris.loxton/Flickr)

01/01: The New Year sees aviation included in the EU’s Emissions Trading Scheme. The decision, which aims to charge all flights in and out of the EU for the carbon emitted for their entire journey, begins a year long battle pitching the EU against other countries and the airline industry.

08/01: Stephen Hawking celebrates his 70th birthday with a warning that climate change will be one of the greatest threats posed to the future of human-kind and the world. Speaking to the BBC he says: “It is possible that the human race could become extinct but it is not inevitable. I think it is almost certain that a disaster, such as nuclear war or global warming will befall the earth within a thousand years.”

15/01: Philips tell RTCC their LED lighting could replace 88 billion litres of kerosene a year. “We are at a tipping point in the LED revolution,” Harry Verhaar, senior director energy & climate change tells us.

23/01: US climate scientist Katharine Hayhoe tells us her profession is feeling under threat after a series of attacks from sceptics. “The abuse, the virulence, the hatred is astonishing. And much of it is coming from people who share much of the same values as I do, and that’s what is so hurtful about it. It’s a wholestyle rejection – you can be right for 99/100, but if you differ on point 100 you deserve anything that people give you.”

07/02: Maldives President Mohamed Nasheed, a leading voice for climate vulnerable states, resigns after a coup. He had brought the plight of climate vulnerable nations – particularly the small island states – to international attention.

16/02: The US launches a voluntary emissions reduction scheme aimed at tackling short-lived climate pollutants, including methane, soot and hydroflourocarbons (HFCs). The Climate and Clean Air Coalition targets pollutants that have a greater effect than CO2 but a shorter lifecycle.

21/02: Research from NASA provides further proof that human activity is behind climate change, showing that despite low solar activity from 2005-2010, the planet had absorbed more heat than it returned to outer space.

15/03: The European Parliament votes in favour of setting a binding renewable energy target for 2030, but fails to decide what that target should be.

20/03: Australia passes a controversial tax on coal and iron ore mining companies, ending a two-year long dispute between the industry and the government.

26/03: A study published in Nature Geosciences finds temperatures could rise by as much as 3°C by 2050. The research uses almost 10,000 simulations and warns even moderate emissions could see the world cross the 2°C barrier at some point this century.

23/04: Mexico becomes the second country in the world to begin legislating against climate change, when its House of Representatives passes a climate law requiring the whole country to reduce its carbon by 50% by 2050.

24/04: UN Secretary-General Ban Ki-moon calls for the Rio+20 Earth Summit to create a sustainable development index that would replace GDP as the main measure of a country’s advancement.

30/04: The Brazilian Chamber of Deputies approves controversial legislation on forests which would ease rules on the amount of forest farmers have to keep on their land. The move sparks a month of protests across the country and the world calling on the country’s President Dilma Rousseff to veto the law, and ends with her vetoing some parts of the Bill.

Report warns that companies rushing into the Arctic could impact on the ecosystems that exist there (Source: USFWS/Flickr)

03/05: A report from leading insurers Lloyd’s of London warns that rushing too fast into exploration of the Arctic could lead to ruined ecosystems.

25/05: Research from the Climate Action Tracker project warns that governments are extending rather than shrinking the gap between their climate change policies and what they need to do to limit warming to less than 2°C.

25/05: An intersessional meeting of the UNFCCC in Bonn leaves delegates feeling “sad” after it exposes the weaknesses of the Durban Platform deal. A central issue discussed is equity – here’s our take on those discussions.

11/06: A new study examining the rising ocean temperatures over the past 50 years finds that man-made emissions have been largely responsible.

19/06: The leaders of the G20 group of countries meet and agree to the full implementation of the UNFCCC COP16 and COP17 agreements.

21/06: Greenpeace launchetheir Save the Arctic campaign which aims to get a UN resolution passed demanding a global sanctuary around the North Pole and a ban on oil drilling and unsustainable fishing in the wider Arctic zone.

22/06: The Rio+20 Earth Summit concludes in Brazil with little to show for the year of preparation and fortnight of discussions. While there are some successes of the conference, including a greater focus on oceans, and an agreement to move forward with the Sustainable Development Goals, civil society show their frustration over the weak text with a mass walkout. 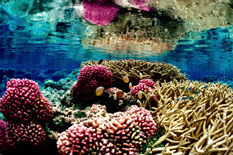 06/07: New research in Science shows that climate change once caused the total collapse of reef systems in the Eastern Pacific lasting 2500 years, and could be on the verge of doing so again.

10/07: Researchers from the UK’s Met Office and USA’s National Oceanographic and Atmospheric Administration find that climate change is increasing the chance of extreme weather events.

24/07: Data from NASA shows that an extreme melt event in Greenland in mid-July caused 97% of the ice sheet’s surface to disappear. Such events occur around every 150 years according to NASA.

31/07: Research from Berkley Earth finds that the average global temperature of the Earth’s land has warmed 1.5°C over the past 250 years and that the warming was due to humans. 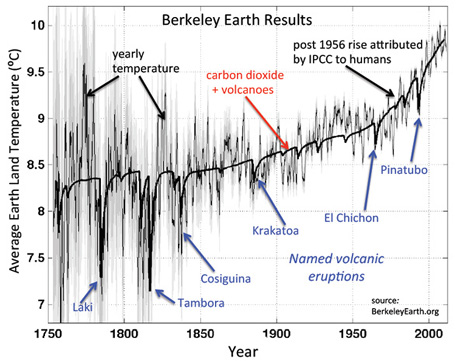 The temperature of the Earth’s land surface, as determined from over 36,000 temperature stations around the globe. (Berkley Earth)

03/08: US Special Envoy for Climate Change, Todd Stern suggests that the 2°C target should be dropped from future climate change negotiations.

17/08: The US drought monitor reports that 30% of the country is in extreme to exceptional drought, amidst fears over agriculture production and rising food prices.

22-23/08: The Executive Director of the International Energy Agency Maria van der Hoeven says that limiting global temperature rises to 2°C is still possible despite the world’s current trajectory. But the UK government’s scientific advisor and former IPCC chief Bob Watson disagrees, saying the target is “out of the window.”

28/08: Australia announces it will join the EU Emissions Trading Scheme. Having already established plans for its own domestic system, the Australian government says this will be fully integrated into the EU scheme by 2018.

28/08: Data from the European Space Agency warns that the Arctic could be ice free in summer by the end of the decade.

12/09: The UN climate talks in Bangkok end with a “draft” document on the 2nd commitment period of the Kyoto Protocol. 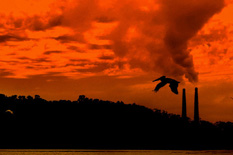 12/09: Fatih Birol, the Chief Economist for the International Energy Agency warns of a doomsday scenario for climate change unless investment in low carbon technology is not ramped up in the next five years. He says the world is on a pathway to 6°C in temperature rise.

19/09: Data from the National Snow and Ice Data Center (NSIDC) and NASA shows that the summer sea ice in the Arctic has shrunk to its lowest seasonal minimum since satellite records begun.

20/09: The EU and China announce details of a deal that will see the two countries work together on a series of environmental and climate projects including the design of a Chinese carbon market.

01/10: The 2012 edition of DARA’s Climate Vulnerability Monitor finds that the carbon economy and the impacts of climate change could be responsible for five million deaths a year. This figure combines 700,000 deaths as a result of climate change impacts and over four million from the health impacts of the world’s carbon intensive economy.

24/10: Songdo, Incheon City in the Republic of Korea is selected to host the Green Climate Fund.

31/10: Hurricane Sandy hits the US’s East Coast, devastating communities in New Jersey and New York. Just a week before the US elections the storm helps to put climate change back on the election agenda as Mayor Bloomberg of New York gives his support to President Obama in its wake.

President Obama re-affirmed his commitment to climate change as he was re-elected (Source: White House)

08/11: President Obama is re-elected in the US and uses his election speech to re-affirm his commitment to climate change.

10/11: The Arab Youth Climate Movement launches ahead of the UN climate talks in Qatar – and is widely hailed as offering ‘new hope’ in the fight against climate change in the Middle East.

12/11: Australia announces it will sign up for a second commitment period of the Kyoto Protocol, but New Zealand becomes the latest country to walk away from the scheme.

13/11: The EU announces a freeze on airlines’ inclusion in the EU Emissions Trading Scheme while the International Civil Aviation Organisation works on a new agreement on aviation emissions.

20/11: The World Meteorological Organisation’s latest Greenhouse Gas Bulletin finds the volume of greenhouse gases in the atmosphere reached a record high in 2011.

20/11: A report from the World Bank warns the world is on a pathway to a 4°C temperature rise by 2100 unless urgent action is taken on climate change.

22/11: The United Nations Environment Programme warns that the emissions gap (the gap between current pledges and the action needed to stay below 2°C) is widening and says efforts to reduce carbon emissions must be accelerated.

28/11: Poland is announced as the hosts for the COP19 climate conference next December. 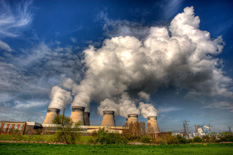 03/12: Figures from the Global Carbon Project reveal that global carbon dioxide emissions are set to reach a record high in 2012.

10/12: The COP18 climate summit ends with the Doha Gateway, including a second commitment period of the Kyoto Protocol. The final hours of the talk leave many confused, as the COP18 President passes all texts in minutes.

Russia expresses anger at being ignored in the final moments, while NGOs criticise a ‘weak deal’.

15/12: A fierce Cyclone smashes through the Pacific state of Samoa, and then sets course for Fiji. The storm leaves at least four people dead, with eight missing, and an estimated 200 injured.

18/12: Data from the National Oceanic and Atmospheric Administration shows November 2012 to be the 333rd consecutive month where global temperatures were above the 20th century average.