Another Conference of the Parties is upon us (COP 18) and its main focus will be a way forward after Kyoto.  “Kyoto 2” as is being called, is an essential centerpiece considering the need for continued commitments to reduce greenhouse emissions.

An agreement that moves toward a new treaty by the 2015 deadline will still have another five years until its possible implementation.

But this is one of many issues that deserve a headline in Doha; with the long term nature of this treaty, more loss and damage to both land and life will occur as political timelines tick away. 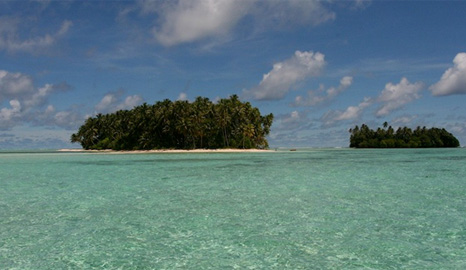 The island of Huni (Tuval), split into two by rising sea levels

The issue at hand is migration and displacement due to the intensification of climate processes.  This, of course, is not a new phenomenon; the Small Island Developing States (SIDS) and Association of Small Islands States (AOSIS) group worked tirelessly to bring this issue to the attention of the world at the Copenhagen talks (COP 15) in 2009.

The difficulty for many small low lying states is that several entire nations will be submerged by rising sea levels; an obvious concern for sovereignty, safety, and international assistance. However, this is only the tip of the iceberg in terms of displacement.

Many more peoples will be and already are being displaced internally due to climate change.

The Carteret Islanders, led by Ursula Rakova and her NGO, Tuele Peisa, have been in negotiations to purchase new land in the autonomous region of Bougainville in Papua New Guinea; the Newtok people in the Yup’ik Eskimo village in southwest Alaska has seen erosion of 100 ft a year leaving their traditional areas too dangerous to stay; and the Guna people on the San Blas archipelago in Panama are scheduled to move inland as soon as 2014.

These are only a few examples of the displacement that is already occurring.

When we stop to consider the short term displacement due to more intense seasonal cyclones, this issue cannot be ignored in the UNFCCC talks this year. Superstorm Sandy was a big reminder this month that even for ‘safer’ areas of the United States, no coastal city is immune from vulnerability. And this is the key. It may show itself at different levels, but vulnerability is everywhere. 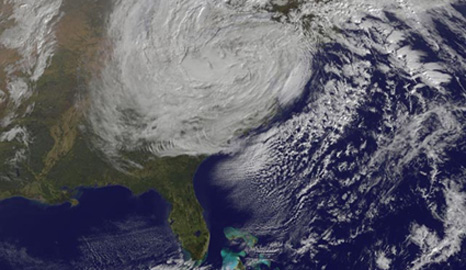 Some economists predict Sandy could cost the US up to $50bn

The Cancun agreement reached at the COP 16, “Invites all Parties to enhance action on adaptation under the Cancun Adaptation Framework, taking into account their common but differentiated responsibilities and respective capabilities, and specific national and regional development priorities, objectives and circumstances, by undertaking, inter alia, the following… measures to enhance understanding, coordination and cooperation with regard to climate change induced displacement, migration and planned relocation, where appropriate, at the national, regional and international levels…” (Decision 14f/CP.16)

The adoption of paragraph 14f is extremely important in that it represents the first time displacement has been officially recognized as a consequence that the world will need to deal with.

However, it is not simply a consequence but an opportunity. Migration and subsequent relocation can also be a viable solution to a changing climate. This acknowledgement can allow the newly established Adaptation Fund  to function as a vehicle to finance specific projects and programs in developing countries of they are Parties to Kyoto.

While the door is open, it is unlikely that the convening nations of the COP 18 will simply walk right through. With Kyoto expiring, it is unclear if the Fund will still function with the same signatories from the previous Kyoto or if it will be stalled in transition to the next treaty which may not fully come to fruition until the end of the decade.

Additionally, Doha will decide how to implement this financial support, a particular point of interest for those who sincerely see that migration and relocation will, in fact, be a reality which will need to be financed for the many who cannot afford to relocate to safer areas.

As of now, there are more questions than answers. Expectations do not appear to be very high for any major outcomes for Doha, but there is still much at stake. Migration as adaptation is important for many nations beyond small island states and will necessitate a new conception of loss and damage.

The United Nations University Institute for Environment and Human Security’s (UNU EHS) Keystone Conference last month posited such a policy brief which will be presented to the COP 18 negotiators. If negotiators can incorporate migration as adaptation as a project type for the Adaptation Fund, it will be a great victory; it will allow solid adaptation progress until a new emissions treaty can be negotiated.

The COP process has mainly been about mitigating carbon emissions, but with exponential arctic melt and the need for an entirely new treaty, the world’s vulnerable may not be able to wait.

Andrea C. Simonelli, Ph.D. is an independent researcher. She is a graduate of the UNU Environment and Human Security Programme (2010) and Oxford’s Refugee Studies Centre Summer School (2009). Andrea is an Associate with the Millennium Alliance for Humanity & the Biosphere (MAHB) and a member of the Roster of Experts, Climate and Development Knowledge Network (CKDN). She specializes in governance responses to human migration; specifically that forcibly displaced by climate change processes.