6°C has often been described as the ‘doomsday scenario’ of climate change.

Forests could burn, seas could rise and life could become a battle for survival as food and water resources steadily diminish.

Scientists are warning this could be closer to reality than previously thought. Since the industrial revolution, the world has warmed by around 0.7°C. Most scientists believe we have committed ourselves to at least the same again given current emissions

But a recent report from consultancy PwC warned current emission reduction pledges must be drastically increased to keep the world below 6°C. Some suggest an average global warming of 6°C could be seen as early as 2100.

This echoes the UN Environment Programme (UNEP) and the International Energy Agency (IEA) whose Chief Economist, Fatih Birol warned: “With current policies in place global temperatures are set to increase by 6°C, which has catastrophic implications.”

6°C is often described as the doomsday scenario where forests will burn and oceans will rise (Source: giumaiolini/Creative Commons)

How much do we know about 6°C?

Very little is currently known about what the world might look like 6°C warmer. Most climate models to date have focused on 2°C and 4°C rises, and even these involve some guesswork.

There are also few comparable events in the past to learn from, making it harder for scientists to predict potential changes.

So what do we know?

“There are some very basic rules,” Corinne Le Quéré, Director of the UK’s Tyndall Centre told RTCC. “Like more heatwaves… More floods and more droughts are [also] typical of a warmer climate because you have essentially more energy in the system.”

To an extent we already know how a 2°C temperature rise will affect life. Arid regions will get drier, wet ones wetter. At 6°C, scientists say all of these will still occur, but they will be more extreme.

“When you are talking about this level of warming, I think tipping points are a very serious possibility; especially if the six degrees happens very quickly,” said Le Quéré.

Such tipping points include the disintegration of the polar ice sheets, causing sea level rises and methane discharges, and the collapse of forests, one of the world’s vital carbon sinks. Once these have been passed there is little chance of turning back the clock.

In the Arctic, warming could see tree types suited to more temperate climates replace Boreal forests. If this happens rapidly it could lead to fires, diseases or pests which could drive the forests to destruction.

With any warming from 2°C to 6°C, it is expected that desertification will become a greater problem, since the movement of water between the earth and the atmosphere will be intensified and biodiversity and ecosystems will be adversely hit. 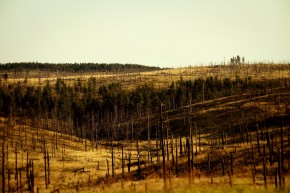 At 6°C forest fires, pests and diseases could spread and destroy the world’s woodlands, releasing more CO2 into the atmosphere (Source: Jaako/Creative Commons)

Much of the land temperatures will actually be higher. Air over water warms at a slower rate than over land, so ocean temperatures are likely to be at the lower range of the scale.

The UK Met Office’s Hadley Centre has mapped this change in the 4°C world, where they estimate much of Africa could see 6°C to 7°C rises, and northern latitudes could see anything from 8°C to 14°C temperature rises.

“Normally the high latitude, Russia and Canada for instance, would warm twice as much as the global average,” said Le Quéré. “You can’t say for sure but you would be looking at 12°C of warming over and around the Arctic and surrounding countries [with a 6°C average].”

These variations would also differ throughout the year. It is usual to experience above-average hot days and the same could be expected in a 6°C world.

Take for instance the 2003 heatwave across Europe (the UK witnessed temperatures over 38°C) which caused 35,000 deaths on the continent. Those above average days in a 4°C world could be 6 to 8°C hotter than they were in 2003, warn scientists.

In Beijing or New York, this could be even more extreme, taking temperatures 8°C to 12°C higher than the hottest day in Europe in 2003.

While much of the developed world can hide away in air-conditioned offices, in the developing world working life is expected to become much more difficult.

Working outside during the summer months would be impossible, and manual workers would have to start working through the night or seasonally.

This is a relatively new area of research, but scientists say the pH of the oceans has already decreased by 30% since the industrial revolution (the lower the pH the more acidic a substance is). They predict the oceans could become 150% more acidic by 2100.

This could have dire consequences for life in the sea. Current studies suggest that ocean acidification causes calcium carbonate – the stuff of shells, skeletons, corals and much of the ocean’s phytoplankton – to dissolve.

This could impact the formation of coral ecosystems and disrupt ocean food webs, as the phytoplankton which forms its base is removed.

A combination of melting ice caps and the expansion of oceans as they warm will also mean a hotter planet could also experience sea level rises.

How high the seas could rise involves a significant amount of guess work, but Le Quéré is more certain on what this could mean. 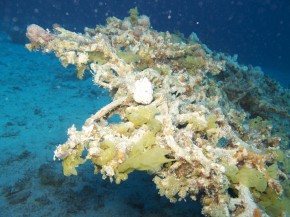 Warming waters and ocean acidification could both break down coral ecosystems, which one billion people currently rely on for their food and livelihoods (Source: Prilfish/Creative Commons)

“It is very very difficult to adapt to high levels of sea level rise. Above a metre it becomes really difficult,” she said. “Even in richer countries. We have seen what happened in New York last week – where you had storm surges of 11 to 12 feet (three metres) and if the sea level is a metre higher than that you would easily get half of your infrastructure flooded.”

One recent study predicted sea levels could rise by one metre by the year 3000, although other studies have predicted a much more rapid rise in levels.

And with drier conditions on land, rising sea levels and a potential wasteland in the oceans, life on Earth will be harder for its inhabitants.

The world population is expected to hit nine billion by 2050, and worsening climate change will make feeding this population much more difficult as the land on which to grow food shrinks.

Today the world already has one billion people going hungry, while another two billion are what is termed the ‘hidden hungry’ where they do not have the right balance of nutrients.

Water will also become scarcer – with consequences both for agricultural systems and daily life for many communities.

“It become more problematic,” said Le Quéré. “A warmer climate means that the water cycle is intensified. You get more rainfall and you get more evaporation – everything goes a bit faster.

“So if you live in a dry area, it is likely that it will get drier. So in drier areas you have less water access. A lot of places live on one river, like the Nile River Basin. If you are reliant on a particular storage to have your fresh water availability then when that runs out it simply runs out.”

Le Quéré said that these impacts will disproportionately affect the poor, who have less resources to help them adapt, and are often much more reliant on the natural world.

There is one episode in history which shows what 6°C may look like, but this takes us back 251 million years ago to the end of what is called the Permian era.

Here, a 6°C rise in temperatures resulted in the extinction of 95% of the planet’s species, and is considered the worst event ever endured by life on Earth.

Sea-levels are said to have risen 20 metres, and flash floods engulfed many coasts. Only one large land animal species was left alive and it took 100 million years for the variety of the planet’s species to return to normal level.

How the planet will react to such a warming, and how far people can adapt is still widely debated amongst circles of scientists, analysts and environmentalists alike.

“If you add all these things together, then it becomes really difficult to maintain our current level of wealth and our capacity to provide food for the citizens,” said Le Quéré.

One thing is widely agreed on; life in a world that has warmed by 6°C will be tough for all living organisms on the planet.