Every day, you probably use at least five forest products without even knowing it. From the time you roll out of your bed and step on your wooden floor, via the nuts and fruits you find in your breakfast cereal, to the medicine you take when you are feeling unwell, forests products are unavoidably part of everyday life.

We seem to have forgotten this. Every year over 60,000 square kilometres of forest (about the size of Ireland) is lost worldwide to make way for agriculture, pastures, mining and other non-forest uses, or is degraded by unsustainable and illegal logging and other poor land-use practices.

And the 1.6 billion people who depend on forests for their livelihoods are displaced or marginalised by these changes to their lands.

Forests supply around 75% of the world's usable water, over a quarter of modern medicines and - in developing countries - the majority of communities sources of fuel and food (Source: james.rintamaki/Creative Commons)

Here we highlight five facts you may have forgotten, or simply didn’t know, about forests.

FACT 1: If people in the Congo Basin farmed beef instead of hunting wildlife, roughly 10% of the forest cover would be lost.

In rural areas of the Congo Basin many communities depend on wild meat hunted in forests for up to 80% of the fat and protein in their diets. But while over harvesting means the practise is becoming increasingly unsustainable, an outright ban on hunting isn’t the solution either, as rural people have very few alternative ways to get essential protein and will continue to hunt illegally. Replacing the six million tonnes of bushmeat consumed each year in the Congo Basin with beef, for example, would have environmentally catastrophic consequences.

“Six million tonnes is equivalent to the amount of beef produced in Brazil, which people estimate has been responsible for 60 to 70 percent of the deforestation in the Amazon basin,” said Robert Nasi, a scientist with the Centre for International Forestry Research (CIFOR).

“So we are talking about 20 or 25 million hectares of forest in the Congo Basin wiped out to put cattle – because cattle cannot live in the forest, they need pasture.”

One solution would be to ban hunting of vulnerable species – the gorillas and elephants – while allowing people to hunt more resilient species, like duikers (small antelopes) and porcupines.

Though demand for water continues to rise, remaining forest lands are disappearing and this has been blamed for everything from flooding to aridity and for catastrophic reductions of water quality. Loss of forests will also have negative impacts on the essential hydrological services and safety net functions forests provide to the livelihoods of local communities.

FACT 3: More than a quarter of modern medicines, worth an estimated $ 108 billion a year originate from tropical forest plants. 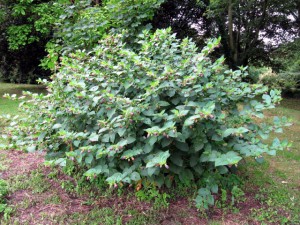 While the deadly nightshade plant has berries which are extremely toxic, it is a vital ingredient in the drug atropine (Source: wallygrom/Creative Commons)

You’ve probably been told to stay away from deadly nightshade (Atropa belladonna) as the foliage and berries are extremely toxic, causing a bizarre delirium and hallucinations. What you may not know is that the drug atropine, which is used to treat bradycardia (an extremely low heart rate) is derived from the deadly nightshade native to Europe, North Africa, and Western Asia. Atropine is a core medicine in the World Health Organization’s “Essential Drugs List”, which is a list of essential medicines needed for a basic healthcare system.

Many of the drugs sold in pharmacies today are synthetic modifications or copies of the naturally obtained substances. Less than one percent of the plants in the world’s tropical rainforests have even been tested for their medicinal properties – so who knows how many live life-saving drugs and new medicines have yet to be discovered, and sadly, how many have already been lost due to deforestation.

It seems plants have also adapted to making medicinal chemicals for their own protection. A few years ago, scientists found plants in a forest produce significant amounts of an aspirin-like chemical when placed under extreme stress.

FACT 4: In some parts of Africa, wood fuels account for almost 90% of primary energy consumption

In many developing urban centres, wood charcoal is the fuel of choice. It takes 7 to 10 tonnes of raw wood to produce one tonne of wood charcoal, making fuelwood collection an important driver of deforestation in Africa– a continent of nearly one billion people who have few alternative fuel sources.

In Dar es Salaam, Tanzania’s capital, the proportion of households using wood charcoal as their main energy source rose from 47% to 71% between 2002 and 2007. This has a knock on effect on both health – from rising respiratory diseases linked with the burning of woodfuels – and climate change due to increased carbon emissions.

FACT 5: Converting one hectare of peat swamp forest can generate up to 70 tons of carbon emissions over 25 years. 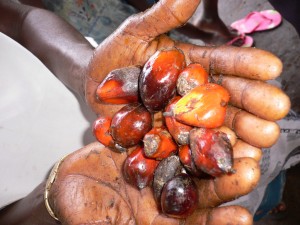 Palm oil is produced from the fruit of the oil palm (Source: oneVillage Initiative/Creative Commons)

Oil palm cultivation is critical for food production and provides an income to millions of people. Indonesia and Malaysia are the largest palm oil producing countries, supplying 85 percent of the world’s demand. In both countries, there are huge economic benefits from oil palm, with its value reaching $1,020 per tonne in January this year.

While oil palm is the most efficient oil crop — with 4 to 9 fold higher productivity than other important oil seed crops — expansion of oil palm plantation has encroached into tropical forests and had a serious impact on greenhouse gas emissions.

A recent study by the Center for International Forestry Research quantified the atmospheric effects on changes in land-use from biofuel production, and found that for palm oil grown on tropical peatland swamp forests (which store 5 times more carbon than lowland tropical forests) the carbon emissions generated from land conversion would take hundreds of years to reverse.

Michelle Kovacevic is a writer for the Forests News blog at the Center for International Forestry Research (CIFOR).

CIFOR is a nonprofit, global facility dedicated to advancing human wellbeing, environmental conservation and equity. Our research and expert analysis helps policy makers and practitioners shape effective policy, improve the management of tropical forests and address the needs and perspectives of people who depend on forests for their livelihoods.