The Obama administration has thrown its weight behind the biofuels industry in the wake of the Navy’s successful trials of the technology.

The Pentagon is one of the biggest backers of biofuels which it sees as an opportunity to buffer itself from fossil fuel price shocks. It is the largest buyer of fossil fuels in the world.

Despite this argument, there is a move in the US Congress to block the Department of Defense from investing in alternative fuels until they have price parity with their conventional counterparts.

Speaking after a successful trial by the Navy’s Great Green Fleet, the administration reiterated its ongoing commitment to biofuels. 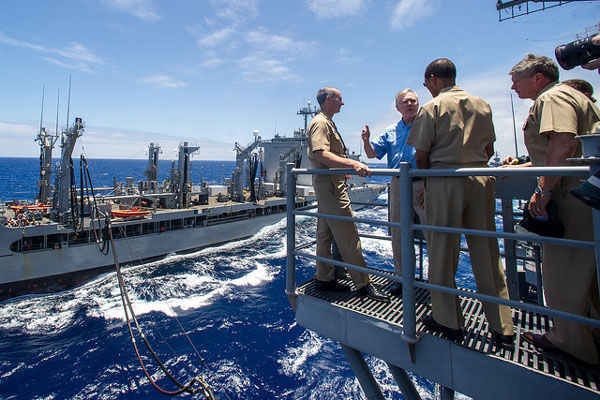 Secretary of the Navy, Ray Mabus said his organisation was well placed to open the biofuels market to other sectors.

“The Navy [as a major customer] can help make biofuels price competitive,” said Mabus. “There were representatives from the airline industry on board the aircraft carrier during the trial. They’re also looking for alternative fuels.”

US Secretary of Agriculture, Tom Vilsack highlighted the role that the sector has on the economy.

“There are 400,000 people already employed directly or indirectly by biofuels and this figure could rise to one million,” said Secretary Vilsack.

“This is not just about energy security, there is an opportunity to build a bioeconomy. It’s healthy for fossil fuels to have some competition and we already know that US consumers pay less at the pump because of the domestic ethanol industry.

“We can make biofuels a win for everybody; our economy, our military and our farmers,” said Vilsack.

Biofuels are criticised for displacing food production as the feedstocks for the fuels can sometimes offer a better return for farmers than growing crops for human consumption.

Vilsack moved to allay these fears saying that no crops or land for food would be replaced with energy crops.

ActionAid USA has raised doubts over some of the claims made by the administration. They say that promoting biofuels,  ethanol in particular, will only drive up food prices in the long-term.

They also questioned Secretary Vilsack’s claims that no food would be displaced by the country’s growing biofuel industry.

“At best, if ethanol-bound corn is being processed as biobutenol it will perpetuate the current food and fuel competition. At worst, it could expand the amount of corn going for fuel instead of food or feed, deepening the competition for ever shrinking available land,” said the group.