Is this village in Alaska home to first climate change migrants in US? 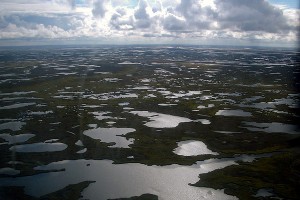 The Yukon-Kuskokwim delta is in a state of flux as permafrost and sea ice melts. (Source: Flickr/JWorley)

The villagers of Newtok in Alaska could have gained the undesirable title of America’s first climate change refugees.

The community in the west of the state has undergone drastic changes as melting permafrost has literally shifted the ground beneath them and the loss of sea ice has removed a vital storm barrier.

It’s plight was brought to attention at the International Institute for Environment and Development’s (IIED) Community Adaptation Conference in Hanoi which concluded this week.

Robin Bronen, executive director of the Alaska Immigration Justice Project, has worked with Newtok and other communities in the state facing a similar predicament.

He said the Newtok Planning Group is looking at the change as an opportunity.

“Their vision of their community is to be sustainable and resilient for the long-term so they’re looking at alternative technologies to get the electricity they need and alternative forms of housing so they use less energy,” Bronen told Reuters AlertNet in Hanoi.

According to Bronen’s academic work there are 200 other indigenous groups addressing how they can deal with the consequences of climatic shifts in the Arctic. At least 12 of these are thought to require relocation.

Migration has been driven by natural changes in the climate for millennia but the rapid human-induced alterations witnessed now are the first to displace modern communities.

In the Pacific Islands storm surges and rising sea levels in several nations are encroaching on freshwater supplies.

Earlier this year the President of the Kiribati islands announced that his country was purchasing 6000 acres of land on Fiji as investment in the country’s future.

Despite the effects being felt on home soils, the existence of anthropological climate change remains an area for debate in US politics.