World Water Day: How much water do you use in a day?

If you are reading this at lunch time you could already have used around 1000+ litres of water just through the food you’ve eaten.

Today is World Water Day, a day of campaigns that this year is focusing on the role water will play in feeding the world’s spiralling population.

But do we really understand the sheer amounts of water that goes into the things we choose to eat? Prepare to be astonished.

Evidence suggests that the more developed a nation, the more its people will eat a high-protein meat-rich diet.

And as a result of both these factors, the UN Food and Agriculture Organisation predicts as much as 70% more food will be needed by the middle of the century.

In the developing world this could be as high as 100%.

“There is a growing awareness that water and ecosystems issues are intimately entwined with food security,” said Professor Timothy Lang from the Centre for Food Policy at City University.

“Water is and has been treated partly as a precious resource but also partly as something that is there and doesn’t need proper management.”

Professor Lang says that much of the problem comes from lack of water management when it comes to agriculture – particularly in richer countries.

“East Anglia and the South East of Britain are in a water fragile state and yet we are using water in a system of agriculture to create cereals to pour 50% of them down the throats of animals,” he explained.

“This is a crazy way of managing water and warping land use and to that extent policy makers have not got the situation under control. They are aware of the water problem, but they are not dealing with the total flow of water embedded – or virtual water – across the country in the terms of food.”

He says there is a mismatch between the existing policy, the actual food systems and the level of consumption.

Policy makers are not acting and consumers are completely unaware of their food’s water footprint. 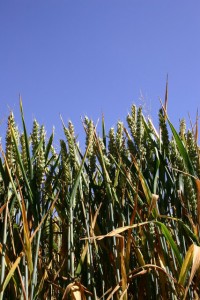 The FOA predict that consumption of meat will rise from 37 kilograms per person per year in 1999-2001 to 52 kilograms in 2050. While the feedstock for animals is water intensive, the slaughter process also requires large quantities of water.

World Water Day 2012 hopes to address the link between water and food as around 30% of food produced worldwide still ending up as waste.

This is particularly seen in developed countries where consumers are unaware of the sources used to create their food.

Professor Lang, however, believes the framework must be put in place by governments to focus efforts in conserving water.

“The water consciousness is rising up the agenda but is it addressed in a systematic way; no,” he said. “Governments have got to set the framework.”

How much water do we consume daily?

Recommendations say people should drink between 2 to 4 litres of water a day.

For the average person’s daily diet, however, between 2000 and 5000 litres of water is used on average.

This takes into account the whole process of food production from growings the crops and rearing the livestock and any water used in turning this into what we are used to finding in the local shop.

If you were substitute your tea with a cup of coffee (140 litres) or if you want some sugar in your tea (10.5 litres) this could add even more water to your breakfast allowance.

For a lunch another 568 litres of water could be used. By selecting a cheese and tomato sandwich (250 litres for the cheese portion, 40 litres per slice of bread and 13 litres for one tomato) your water footprint is already 343 litres. Then if you wanted an apple (70 litres) and a bag of crisps (185) to go along with that you footprint would be higher.

Once again another cup of tea or glass of juice would further add to your day’s water footprint. 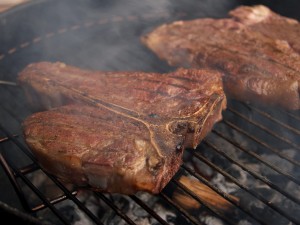 For dinner if you were to go for a Margarita pizza for example, you could see a footprint of around 1216 litres, or if you wanted a burger, that would be 2400 litres of water. Meat could see your footprint vary from 614 litres (100g of chicken meat) to 7000 litres (a beef steak). A portion of rice would be 140 litres, while a pasta choice would be 130 litres while adding vegetables to your meal could add another 10.5 litres.

If you wanted some chocolate later in the evening, you would add 2400 litres to your footprint for 100g. And if you wanted an evening drink a glass of beer would be around 75 litres and a glass of wine could be 120 litres.

VIDEO: World Water Day 2012’s video explains why the link between water and food security is so important…