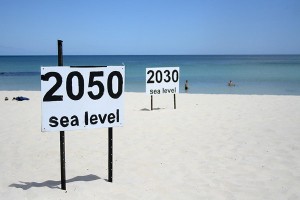 While the research found significant rising of 20m, even smaller, near-term changes will have serious consequences. (Source: Flickr/Go Greener Oz)

A previous period of warming of 2°C triggered sea level rises of more than 20m, according to new study published yesterday.

Researchers from Rutgers University used soil and rock cores dating from 2.7 million to 3.2 million years ago, known as the Pliocene period, to estimate the degree of melting during that time.

“The difference in water volume released is the equivalent of melting the entire Greenland and West Antarctic Ice Sheets, as well as some of the East Antarctic Ice Sheet,” said H. Richard Lane, program director of the National Science Foundation’s Division of Earth Sciences, which funded the work.

“Such a rise of the modern oceans would swamp the world’s coasts and affect as much as 70% of the world’s population,” added Lane.

The Pliocene had similar atmospheric carbon dioxide levels as today and was around two degrees warmer.

Lead researcher Professor Kenneth G. Miller was keen to point out though that these dramatic sea level increases are not imminent.

“You don’t need to sell your beach real estate yet, because melting of these large ice sheets will take from centuries to a few thousand years,” said Miller.

Despite this, Miller warned that the findings did highlight the sensitivity of the earth’s largest ice sheets.

“The natural state of the earth with present CO2 levels is one with sea levels about 20 metres higher than today,” he said.

Modest sea level rises are already creating problems in low-lying parts of the world. Freshwater supplies are being contaminated by sea water.

Large-scale displacement has already occurred in the Pacific and cross-border migrations have become a realistic prospect.

Earlier this month, the President of Kiribati said his country had purchased a parcel of land in Fiji to ensure its own economic prosperity.