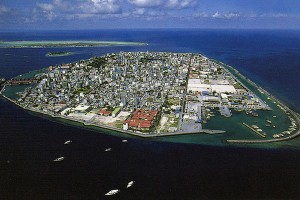 The Maldives capital, Male, and other larger, more resilient islands are re-housing the country's most vulnerable. (Source: Flickr/Wallygrom)

Climate change action will not stop in the Maldives, despite the recent political turmoil that saw Mohamed Nasheed, an influential advocate for the cause, removed from power.

Former President Nasheed had become an established voice internationally calling for reductions in emissions to protect the low-lying islands of the Maldives from rising sea levels.

Nasheed was removed from power in a reported coup last month.

Ibrahim Naeem, head of the Maldives Environment Protection Agency, said the country’s leadership on the issue would not be affected.

“True, Nasheed has been very vocal and very popular with western society. He’s really a good man advocating for (action on) climate change and the impacts we’re facing in the Maldives,” Naeem told Reuters AlertNet.

“I don’t think our climate policy will change. His vice president is ruling the country now.”

“The Maldivians have been living in these islands for more than 3000 years and we don’t have any intention to leave this country,” said Naeem, adding that the country’s strategy of consolidating its population on the larger, most climate resilient islands would continue.

Under the scheme, residents on smaller islands with less than 200 inhabitants enter negotiations with the government for resettlement on larger islands where flood defences and access to freshwater is superior.