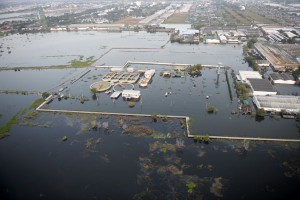 The recent flooding in Bangkok has triggered massive investment in flood defences from the Thai government. (Source: UN/Mark Garten)

Although many disasters cannot be exclusively linked to climate change, longer term disruptions in rainfall and temperature can often worsen the situation and erode resilience.

Seasonal monsoon floods are nothing new but the consistent severity of floods, exemplified in Thailand last year, back-up theories that climate change is reinforcing the rains.

According to new research commissioned by the ADB, this situation is likely to worsen.

“Governments should not wait to act. By taking steps now, they can reduce vulnerability, strengthen resiliency, and use migration as an adaptation tool rather than let it become an act of desperation.” said Bindu Lohani, Vice President for Knowledge Management and Sustainable Development, ADB.

“The environment is becoming a significant driver of migration in Asia and the Pacific as the population grows in vulnerable areas, such as low-lying coastal zones and eroding river banks,” added Lohani.

Of those 42 million displaced in the past two years, the ADB was unable to estimate how many of those were unable to return home and became permanent migrants.

While the report recognised that most movement occurred within countries, the volume of cross-border migration is anticipated to increase.

As well as recommending improved climate resilience in rural areas, the report suggests that Asia’s megacities will be the recipients of many migrants, and should prepare accordingly.

The ADB estimates the Asia-Pacific’s climate adaptation costs to be $40bn through 2050. No funding is currently assigned to migration-related issues.

The President of the Kiribati islands in the Pacific recently agreed a deal to purchase land on Fiji. While ruling out an evacuation in the short-term, Anote Tong has said that the new land is designed to provide economic resilience to climate change.