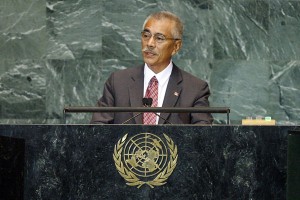 The President of the pacific Islands of Kiribati has rejected recent media stories claiming that residents were to be relocated to Fiji.

Following the purchase of 6000 acres on Fiji by the government last week, it was claimed that the land would re-house climate change refugees.

Last week he was quoted as saying: “We would hope not to put everyone on one piece of land, but if it became absolutely necessary, yes, we could do it”.

In the statement released today however, he claims that the land will be used to help prepare younger generations for a future working in Australia or New Zealand.

“Our priority is to serve the needs of our people today and steer the country to the path of sustainable economic development,” said President Anote Tong.

“I’m glad we’ve taken this milestone with Fiji and hope that developed countries can engage with countries like us in this arena,” said Tong adding that practical action was more valuable in the short-term than “negotiating climate change issues where common ground is far from reach”.

The rumoured $9.6m investment in Fiji could be used to re-home climate refugees but the government stresses that its primary role is economic.

Last year several pacific islands required bottled water to be flown in after drought and sea water contamination of springs.