Climate change could force the entire nation of Kiribati to re-locate to Fiji, the nation’s president has warned.

Speaking to the Associated Press today, Kiribati President Anote Tong said his Cabinet had agreed a plan to buy around 6,000 acres of land on Fiji’s main island, Viti Levu. 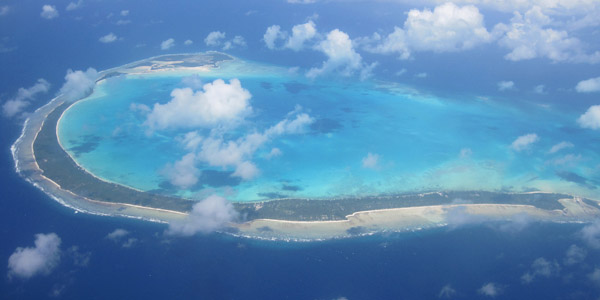 While the area would be big enough to house the entire 103,000 residents of Kiribati, Tong said the relocation would be a last resort.

“We would hope not to put everyone on one piece of land, but if it became absolutely necessary, yes, we could do it,” Tong said. “It wouldn’t be for me, personally, but would apply more to a younger generation. For them moving won’t be a matter of choice. It’s basically a matter of survival.

“We’re trying to secure the future for our people. The international community needs to be addressing this problem more.”

Paid for by phosphate mining on the Kiribati islands in the 1970s, the land in Fiji – which is located about 1,400 miles south of the archipelago – is being sold by a church group for about $9.6 million.

Some of Kiribati’s villages have already had to move as climate change and sea level rise impact the islands – many of which sit just a few feet above sea level.

Some scientists estimate current sea level rise in the Pacific of about 2 mm per year, and expect this rate to accelerate due to climate change.

Other options being considered by Kiribati to combat climate change include shoring up some of the islands’ sea walls – ensuring that the nation continues to exist in some form even if the worst-case scenario was witnessed.

Other more extreme measures considered include building a floating island to relocate people to.

Tong says he hopes Fiji would be just one of several options for relocating people, although the current land being considered is three times larger than the atoll of Tarawa which is currently home to more than half of Kiribati’s population, and could potentially home the entire population.

He says he is waiting for full parliamentary approval of the plans before formally discussing the potential relocation with Fijian officials.

Kiribati is not the first Pacific Island to consider such drastic measures to combat climate change.

Last month, former president of the Maldives, Mohamad Nasheed called on the Australian government to prepare itself for a wave of climate refugees as residents look for a new home.

How the latest move by Kiribati will be received by Fiji, however, it yet to be known. Tong says he is waiting for full parliamentary approval of the plans before formally discussing the potential relocation with Fijian officials.