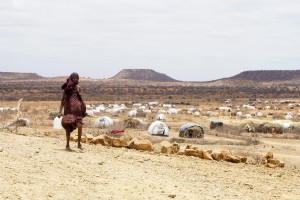 Climate Change should be considered as a security threat, parliamentarians from the African Union have urged.

Speaking at an Inter-Parliamentary Dialogue on Climate Change and Peace and Security in Ethiopia this week, the members from 14 countries called for issues affecting the environment to be included in national security policies.

“Climate change may not directly cause violence, but it interacts with and exacerbates existing problems,” said Debay Tadesse, from the Institute for Security Studies in Ethiopia.

This is witnessed as climate-induced refugees move into other regions suffering from climate, economic and social strains.

“Conflicts arise when people of a different ethnic group move quickly into areas suffering from limited resources. This can compound social pressures and transfer conflict from one location to another.”

A report by the UK’s foresight group last year warned that climate-induced migration had been underestimated and threatened to leave millions migrating into vulnerable areas, and millions more trapped.

The aim of the African conference was to encourage MPs to recognise climate change as both an environmental and security challenge.

While the focus of the meeting was to look at the problems facing Africa, it is an issue which will spread many countries across the world as climate change worsens.

In Durban, William Lacy-Swing, Director General of the International Organisation on Migration (IOM) used the example of the evacuation and repatriation of migrant workers in the Libya conflict last year, and the pressures felt in Europe by such a move.

“There is such a thing as donor capacity and donor fatigue so I think we have to widen the circle of those who are willing to assist,” he said.

The IOM says 42 million people were displaced in 2010 from what it calls climate induced migration – and Lacy-Swing warned with that number set to increase, more attention needs to paid to the subject.

“I think we have to do a better job of recognising that the most fundamental problem is that people are going to be displaced in massive numbers.”

Last month, in an article for RTCC, Jeffery Mazo, IISS Research Fellow for Environmental Security and Science Policy, looked at the role climate change may have had in the Arab Spring, which spread across the North Africa and the Middle East last year.

He also said while climate change does not directly cause conflicts like these, it is a threat multiplier – although many other pathways not including climate change could have led to the same outcome, climate change increased the likelihood of that outcome.