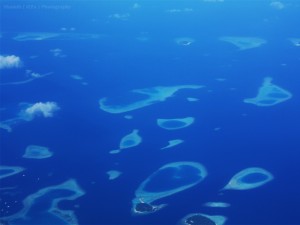 80% of the Maldives is only 1 metre above sea level (Source: Easa Shamih/flickr)

The President of the Maldives has urged the Australian government to brace itself for a wave of climate refugees as his country’s residents look for a new home.

Speaking to the Sydney Morning Herald, President Mohamed Nasheed, said the country would be considering Australia as one of several possible countries as sea level rise makes remaining on the islands impossible.

“It is increasingly becoming difficult to sustain the island, in the natural manner that these islands have been,” he said. “If everyone else around Australia is so poor and unable to fend for themselves and have a decent life, would that necessarily make life in Australia any better? Would that be the castle that you can defend?”

The Maldives is made up of some 1200 islands, 200 of which are inhabited. The highest point of the country is just 2.4 metres above sea level and 80% of it is less than 1 metre above sea level.

With 14 of the islands already abandoned, and three more becoming uninhabitable each year, the Maldives could become one of the first countries to disappear due to  rising sea levels.

The Intergovernmental Panel on Climate Change predicting that sea levels could raise by up to 59 centimetres over the next century, the Maldives will not be the only country under threat.

Other low-lying Pacific Islands could be affected, including Kirabati, Tuvalu, and the Solomon Islands.

With Australia the nearest neighbour for many of these islands, it could face increasing pressure from migration.

Speaking to RTCC in Durban, William Lacy-Swing, Director General of the International Organisation of Migration (IOM) warned that countries could soon feel the pressure.

“There is such a thing a donor capacity and donor fatigue so I think we have to widen the circle of those who are willing to assist,” he said.

The IOM says 42 million people were displaced in 2010 from what it calls climate induced migration – and Lacy-Swing warned that this would increase, saying he was disappointed at the lack of attention the subject was given.

“I think we have to do a better job of recognising that the most fundamental problem is that people are going to be displaced in massive numbers.”

President Nasheed said the Maldives were considering several countries if it came to the point when re-location was vital, including Australia, Sri Lanka and India.

”If nations won’t do good for themselves, they really must do good for everyone around, simply in your self-interest as well,” he said. ”Not necessarily because you’re so nice, and so benevolent and good that you want to provide others with things.

”But I think it’s really quite necessary for Australians and for every rich country to understand that this is unlike any other thing that’s happened before.”