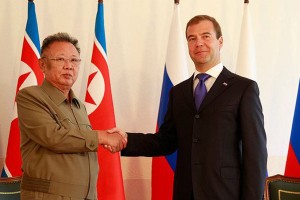 Propaganda from North Korea is frequently mocked in the West. But in between stories about on “the warmongers” and “fascist crackdown”, the state-run news agency KCNA, has also run several pieces on the threat of climate change.

In 2002, KCNA said that: “The repeated natural disasters that hit the DPRK (North Korea) are attributable to the abnormal weather caused by global warming. The speed of warming in Korea at present is three times the average speed of global warming.” They didn’t clarify that last claim but did call for concerted action from all to combat the threat. It even ratified the Kyoto Protocol in 2005.

News of the death of Kim Jong-il was met with predictable televised hysteria on KCNA and equally inevitable media speculation on regional instability in the West. Attention will turn to guesses on how his successor, Kim Jong-un might lead the country through its numerous challenges, including that alarming rate of climate change.

The first hope its 25 million citizens might have for their new leader, may well be concerned with food rather than the nuclear programme or the latest spat with the South. According to the UN’s Food and Agriculture Organisation (FAO) the country has ordered only 325,000 tons of the 739,000 tons of imported cereals that is required to feed its population.

“This productivity gap represents a potential for the North to increase its farm output and eliminate chronic food shortages by adopting appropriate technology, inputs and measures,” says Kisan Gunjal, FAO economist and co-leader of its mission in North Korea.

Domestic production, though estimated to rise 8.5% this year, faces many challenges. Increased extreme weather events including typhoons and torrential rains have increased as ocean temperatures have risen.

Severe winters and mountainous terrain limit the area of land suitable for agriculture, and the length of the growing season.

From a food security perspective, North Korea has been in trouble throughout Kim Jong-il’s reign. A period of alternating droughts and severe flooding and the collapse of the Soviet Union left the country vulnerable and without its key trading partner to rely on. Three years of famine followed, which the country has barely escaped from since.

Climate change has already been linked to conflict in other parts of the world with pressure on grazing land in parts of Kenya cited often. So how great is the threat of climate change triggering upheaval in North Korea?

“Overall climate change is a driver of insecurity globally,” says Dr Jeffrey Mazo, managing editor of the journal Survival and Research Fellow for Environmental Security and Science Policy at the International Institute for Strategic Studies.

Earlier this year the IISS published a piece looking at the effect of record food prices on the Arab Spring. While acknowledging that these prices were largely the result of climate change, they would not in isolation have been enough to trigger the series of revolutions.

Instead, climate change’s role was as a threat multiplier, an often used phrase (particularly by the US military’s research into climate change) put into practice.

“The existing food stress and political upheaval in North Korea are enough on their own to drive insecurity. The increase in the chance of a bad winter does not represent a tipping point in North Korea in the same way that climate change could prove a game changer in more stable countries such as Indonesia,” says Mazo.

While foreign eyes are watching the country’s international relationships, it is this domestic shortfall that could trigger greater insecurity.

Aside from the fact that hungry citizens are not happy citizens, accepting foreign aid flies in the face of the nation’s Juche ideology, which is anchored on the notion of the country’s ability to be entirely self-sufficient.

China currently provides 45% of North Korea’s food supply as state aid. As the adverse effects of climate change continue to drive global food prices up, relying on the charity of others could prove a risky strategy.

This weekend, prior to news of Kim Jong-il’s death, the US was expected to announce a huge food-based aid package for North Korea as part of the six-party international talks designed to dismantle the Pyongyang’s nuclear weapons programme.

Those loyal to the Juche system after Kim Jong-il’s death, might just about be able to accept help from China to stave off famine, but assistance from the States might be too hard to swallow.