Oxfam call for food security to be addressed at Durban

Extreme weather and climate change are already endangering food security and must be addressed at COP17 according to Oxfam International. 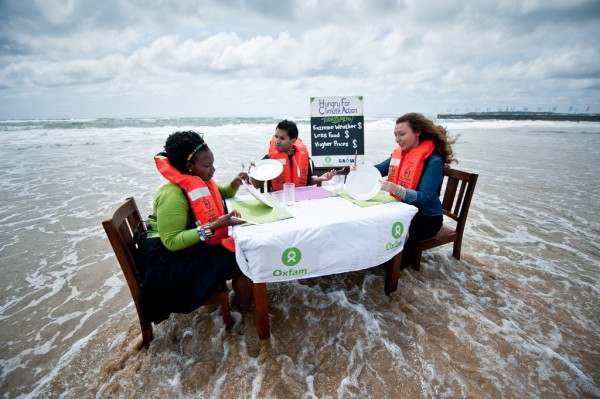 In its briefing to mark the beginning of the conference, it called on parties to take the threat of climate change on food security from extreme weather events seriously – particularly following the recent report from the IPCC, which made links between climate change and worsening weather events.

Kelly Dent from Oxfam International said; “We’re here to show the effects that climate change is going to have on food security for millions of people around the world, particularly people living in developing countries. We are going to see an increase in extreme weather events which is going to impact dramatically on people’s ability to eat.”

When drought struck the Horn of Africa in 2011, the price of maize increased by between 150 and 200% making this staple food unaffordable for many people – and the drought pushed 13 million people into crisis.

When heatwaves also hit Russia and the Ukraine in 2010 the drought and fires that followed triggered a 60 to 80% rise in global wheat prices.

Meanwhile heavy monsoon rainfall and flooding in Southeast Asia sent the price of rice up by 25% in Thailand and 30% in Vietnam.

Dent stresses that the impact on developing countries and poorer communities who did the least to cause climate change would be much worse than in other regions around the world saying many people will feel a double shock, first having to cope with extreme weather and then the knock-on effect to food prices.

And Oxfam warns this is a problem happening now and not a future issue, and called for action in Durban.

They want to see three things; firstly a legally binding agreement to follow Kyoto, secondly decisive action to close the emissions gap; and finally delivery of long-term finance to aid the poor and developing nations as agreed under the Green Climate Fund at Cancun.

Dent said: “We have to remember that it is the poor people who did least to cause climate change and they urgently need our support to adapt to climate change and the impacts that is having on their lives now. We are calling on government to finalise a Green Climate Fund and to put money into that so that we can make sure there is money available to help poor people adapt.”