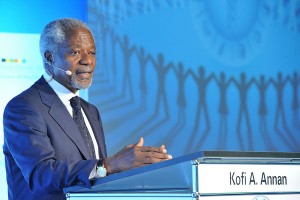 Kofi Annan has slammed world leaders for their failure to act on climate change and has warned of dire consequences for the world’s poorest.

Speaking at California’s Stanford University, the former UN secretary general called for a ramping up of action from governments starting in Durban at the COP17 negotiations.

“Climate change is an all-encompassing threat to our health, security, and stability. Yet so far, our generation of leaders – including those here in the United States – have failed to find the vision or courage to tackle it,” said Annan.

“This lack of long-term collective vision and leadership is inexcusable. It has global repercussions, and it will be those least responsible for climate change- the poorest and most vulnerable, that will pay the highest price.”

The Nobel Peace Prize-winner said that increasingly difficult agricultural conditions will force farmers to leave their land, not just in Africa but around the world, triggering mass migration and food shortages.

“So we must hope that the Climate talks in Durban next month move us towards a universal and fair framework to tackle climate change. We need concerted action to reduce global emissions and protect citizens and countries against the impact of climate change,” he said.

“Key to such an agreement, of course, will be recapturing the sense of common purpose based on shared values – something we seem to have lost in recent years.”

Two reports released this week have highlighted the urgent need for action.

The IEA predicts that the window to limit warming to two degrees will close by 2017. A study by the charity Christian Aid claimed that Africa requires $35 billion of investment per year to bring clean energy to the continent.