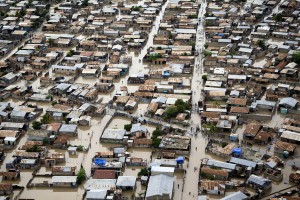 With 42 million people were displaced by natural disasters in 2010, policy makers and aid agencies must consider planned migration in the face of global climate change, says a new report from the Foresight Group.

The research, ‘Migration and Global Environmental Change’ – a two year study involving 350 experts in 30 countries – found that the challenges of migration due to environmental change had been underestimated, and risk leaving millions of people trapped in vulnerable areas while other continue to move into danger

Professor Sir John Beddington, the Government’s Chief Scientific Adviser and Head of the Foresight Programme said: “Environmental change threatens to have a profound impact on communities around the world – particularly in low income countries. However, this report finds that the nature of the global challenge goes beyond just focusing on those that might try and move away from areas of risk.”

“Millions will migrate into rather than away from areas of environmental vulnerability, while an even bigger policy challenge will be the millions who will be ‘trapped’ in dangerous conditions and unable to move to safety.”

Migration is costly, but those communities – particularly from small island environments and marginal agricultural land – impacted by climate change will see their livelihoods diminished and will therefore be unable to afford to move.

The report predicts that in the coming decades, millions will be unable to move away from locations in which they are extremely vulnerable to environmental change.

As trends of rural to urban migration continue, more people could also be moving into vulnerable environments – with inadequate water and housing. Professor Neil Adger, one of the report authors, from the University of East Anglia said: “The sustainability of growing cities is a key challenge for the coming decades. Migrants are often most vulnerable to environmental hazards in cities: so urban planning needs to focus on new residents in their sustainability plans.”

By 2060, estimates suggest that – through both population growth and migration – 192 million more people will be living in urban coastal floodplains in Africa and Asia.

The research suggests that the problem has been over-simplified by the term ‘climate refugees’ and policy makers must acknowledge that climate threats are rarely the sole driver for migration.

It calls for them to see relocation not only as a problem associated to climate change but also a solution. Migration often opens up new sources of income to families, which in the long run makes them more resilient to a changing environment.

The Cancun Adaptation Fund and the Green Climate Fund could both be finalised at the UN’s COP17 climate conference in Durban next month. The report says they will be better able to deliver these mechanisms if they take into account the links between climate change and migration, as well as its positive outcomes.

It also calls for action sooner rather than later and offering planned and managed migration, reducing the chance of humanitarian emergencies and displacement.