As the global population hits 7 billion some of the world’s fastest growing populations will be most at risk from climate change, according to new research by risk analysts Maplecroft. 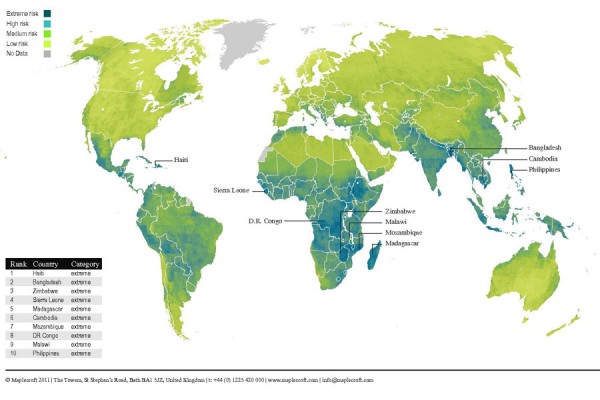 With emerging economies including Bangladesh, Vietnam and India being at “extreme risk” the whole world could feel the impact.

A new map of climate vulnerability produced by Maplecroft looks at various measures of the risk of climate change impacts, such as storms, floods and droughts, along with the social and financial ability of countries to cope.

It rates 30 out of 193 countries – all within the global south – as being at “extreme risk”, notably Haiti at number one, Bangladesh at number two, Sierra Leone at four, Zimbabwe at three and the Philippines at ten.

At the other end of the spectrum the best performing countries were almost entirely from Northern Europe – including Finland, Ireland, Latvia and Norway. The UK is at 179 on the scale, while the US is at 160, both in the “low risk” prediction range.

The Maplecroft analysis found that not only were these countries less exposed to climate events, although some local areas were still at risk from flooding, drought and sea-level rises, they were also the countries which already have national adaptation strategies in place.

This highlights what has become a contentious issue as countries attempt to move towards a global deal to tackle climate change. Rich industrialised nations who have caused the changes in temperature and weather patterns related to climate change through historic emitting are least at risk and most able to protect themselves, while the developing world takes the brunt of climate related impacts.

Central to the UN COP 17 annual climate talks in Durban next month will be how these rich nations can compensate those developing nations – helping them to adapt to climate vulnerability.

But with an increasingly global economy, however, every nation will feel the impact of climate change, as some of the World’s biggest emerging economies – such as Bangladesh, Vietnam, the Philippines and Indonesia – are most at risk.

Costs of the Thailand flooding

Thailand, where severe flooding has cost the country an estimate $3.9 billion since July, provides an example of this, as the high concentration of technical firms has put global supply chains at risk.

Dr Charlie Beldon, Environmental Analyst at Maplecroft says: “These impacts could have far reaching consequences, not only for local populations, but on business, national economies and on the balance sheets of investors around the world, particularly as the economic importance of these nations is set to dramatically increase.” 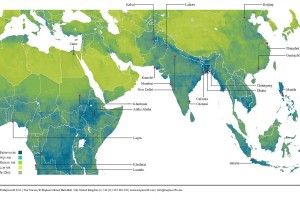 The Maplecroft analysis also charts vulnerability down to a 25km area in the subnational level of the vulnerability index. It finds hotspots of “extreme risks” in south west Brazil and coastal regions of China where at a national level the countries were “medium risk”.

Analysts point to rapid population growth as a major cause, nowhere better illustrated than in the megacities of Asia. Six of the world’s fastest growing cities were measured “extreme risk” by Maplecroft – including Calcutta, India; Manila, the Philippines and Dhaka and Chittagong, Bangladesh.

With pressure being placed on infrastructure which is already being pushed to breaking point emergency response becomes less effective just as those disasters become more frequent.