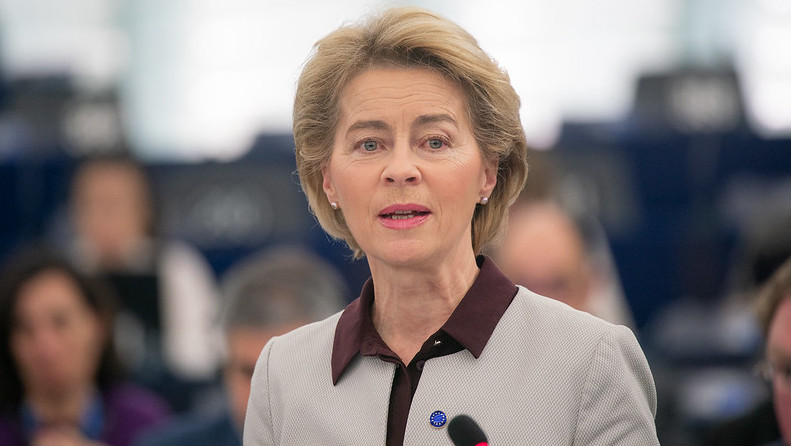 European Commission President Ursula von der Leyen stressed the need to adjust EU state aid rules, argued for European funding for a European industrial policy, and insisted on upholding cordial relations with the US ahead of biannual consultations.

The bi-annual Trade and Technology Council has become an exchange forum for trade issues between the EU and the US since its launch in June 2021. Relations between the partners are at a low following EU outrage in the face of the Inflation Reduction Act (IRA) – a $369 billion clean industrial policy package – going into the meeting on 5 December.

“The Inflation Reduction Act is also raising concerns here in Europe, against a very particular backdrop for our industry and economy,” von der Leyen told students at the College of Europe on Sunday (4 December).

She singled out three aspects of the IRA: the “Buy American” logic that underpins parts of the subsidy scheme, tax breaks for companies producing in America, and “production subsidies that could lead to a subsidies race.”

This would have real effects on companies’ choice of production location. “We have all heard the stories of producers that are considering to relocate future investment from Europe to the US,” she added.

So drastic appears the challenge that the Commission may again relent on keeping a lid on state aid. “We have to adjust our own rules to make it easier for public investments to power the transition,” she stressed.

Relaxing state aid rules has long been a priority for both business interests and countries with deep pockets. At Berlin’s behest, Brussels quadrupled the limit for no-questions-asked state aid via the “Temporary Crisis Framework” from €500,000 to €2 million not too long ago.

Coincidentally, this matched a demand by BusinessEurope in October. For clean technologies, the European business association last asked for a “clean technology” relaxation of state aid rules in late 2021.

However, while von der Leyen recognised the need for more state aid, she also warned of the distortions that even more state aid by individual member states would cause to the level playing field within the EU’s single market.

“The goal of our European industrial policy is for European industry to be the leaders in the clean transition,” the Commission President added. This would mean boosting research and development, but also “new and additional funding at the EU level.”

In an interview with Journal du Dimanche, published on 3 December, the EU Commissioner for Single Market, Frenchman Thierry Breton, insisted that the EU “must also move forward in designing a massive support plan for industry”.

Breton has long advocated for another round of joint EU debt. “Since not all European states have the same debt capacity, we must ensure that they can borrow on the same terms,” he added. The figure he suggested is €350 billion, 2% of the EU GDP, to match the IRA.

“We have no choice. The United States has passed the IRA. China is helping its companies massively and trying to attract ours. It is up to us, and no one else, to devise our response,” Breton stressed.

In her speech, von der Leyen argued for the idea of a “Sovereignty Fund”, but she did not go into details, omitting the amount of money such a fund would need and how it should be financed.

Von der Leyen also referred to short-term measures via REPowerEU, the bloc’s plan to rid itself of Russian fossil fuels. “We are now working on boosting REPowerEU.”

In her speech, Von der Leyen decided not to mention WTO, the global trading body. This presents a departure from the language used by Berlin and Paris. In his interview, Breton insisted that the IRA violates WTO rules, Habeck denounced “local content” rules as in violation of WTO rules in late November.

“Cooperation instead of confrontation,” she stressed.

The EU has been engaged in talks with the US both at the level of working groups and at a higher level, with Trade Commissioner Valdis Dombrovkis taking point. Breton has largely bowed out, opting not to take part in the 5 December meeting.

The “EU will respond in an adequate and well-calibrated manner to the IRA,” the President stressed, but ruled out a “costly trade war.” Whether a cheap trade war is on the cards is as yet unclear.

Instead, she highlighted all the achievements of transatlantic cooperation in the past year.

These include “additional deliveries of 15 bcm of LNG this year,” ending “long-standing” disputes on steel tariffs – a policy put in place by the Trump administration, the Airbus-Boeing dispute, and on securing data flows – for now.

On climate, von der Leyen lauded the effectiveness of joint action on the climate, citing the Global Methane Pledge, an agreement to cut 30% of the super-greenhouse gas methane by the decade.

Yet, the EU’s carbon border tax (CBAM), which will penalise countries with less ambitious climate action than the bloc, is already looming – set to start in the second half of the 2020s – which has business groups concerned.

All carrots, no stick, von der Leyen’s final offer to the US is to jointly dominate global standard setting.

“Take, for example, the charging infrastructure for EVs: if Europe and the United States agree on common standards, we will shape global standards and not leave it to others,” she stressed.