Egypt clamps down on activism and undocumented workers ahead of Cop27 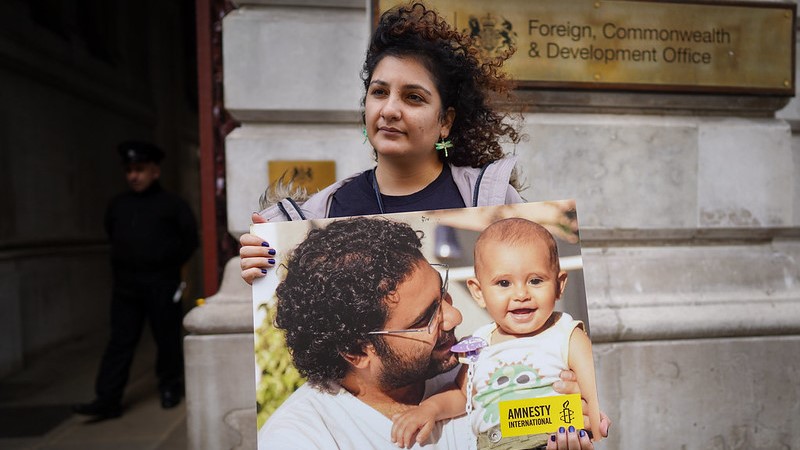 Mona Seif stands in front of the UK's foreign office to call for the release of her brother, Egyptian-British activist Alaa Abd el-Fattah ahead of Cop27 (Photo: Alisdare Hickson/Flickr)

Egyptian authorities are clamping down on activists and undocumented workers ahead of hosting the Cop27 climate summit, human rights watchers report.

At least 67 people have been arrested in Cairo and other cities over the past few days, according to the Egyptian Commission for Rights and Freedoms, in relation to a protest against economic conditions planned for 11 November.

Around Sharm el-Sheikh, the Red Sea resort hosting the conference, security officers are carrying out random ID checks, according to sources on the ground. Egyptians who cannot show formal proof of work or residence are being sent back to their birthplaces. Some have waited six or seven hours at checkpoints around the city, only to be turned away.

While the government has released more than 660 prisoners as part of a “national dialogue”, prominent Egyptian-British activist Alaa Abd el-Fattah remains in jail.

His sisters Mona and Sana’a Seif are leading a campaign from the UK to secure the release of el-Fattah and other political prisoners, while the global spotlight is on Egypt.

“Cop27 is our first opportunity for a long time to push for whatever improvements we can get on human rights and particularly push to get as many unjustly detained people out of prison as possible,” Mona Seif told a Twitter Space organised by Human Rights Watch.

El-Fattah and Seif played prominent roles in the 2011 revolution, when Egyptians rose up in protest against poor economic conditions and political oppression. The movement eventually overthrew president Hosni Mubarak.

Mohamed Lotfy, executive director of the Egyptian Commission for Rights and Freedoms (ECRF), described El-Fattah as “an iconic figure who inspired millions of Egyptians” who is now “on the verge of dying”.

El-Fattah’s health is deteriorating after 280 days of hunger strike, his allies report. Earlier this week, he said he would escalate the strike and stop drinking water from 6 November, when the Cop27 summit starts.

If the Egyptian authorities refuse to release him, “a catastrophe is about to happen,” Lotfy warned. “I fear this is going to unleash a lot of anger from the international community, from Egyptians and from everybody participating in Cop27.” 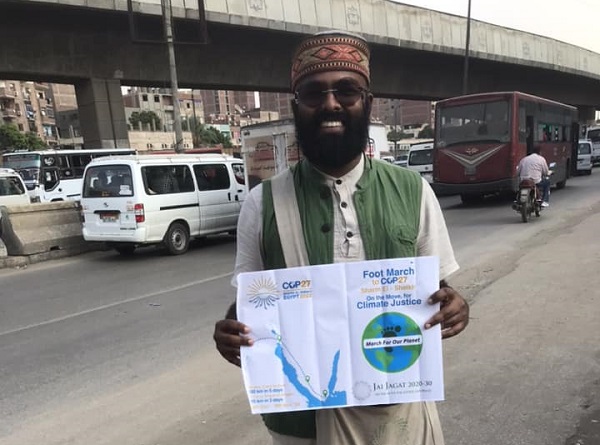 Ajit Rajagopal setting off on his march to Sharm el-Sheikh in Cairo before his arrest (Photo: Ajit Rajagopal/ Facebook)

At least one Cop27 delegate has been caught up in the crackdown.

On Sunday, Ajit Rajagopal, an Indian activist from Kerala, was arrested after setting out from Cairo on a solo climate march to Sharm el-Sheikh. He was questioned and detained without food or water for 24 hours along with his friend, human rights lawyer Makario Lohzy. The pair were released without charges and Rajagopal aborted his march.

The major international event comes as Egyptians are again suffering from a cost-of-living squeeze. Annual inflation reached 15% in September, according to Egypt’s central bank. The Egyptian pound is dropping in value and the government fixed the price of bread.

Seif said the security vetting in Sharm el-Sheikh had become “extreme” and workers had been told not to leave their homes after working hours. “The Egyptian presidency is trying to make sure that whoever is visiting and attending Cop27 does not come in contact with Egyptians,” she said.

Every year, political oppression intensifies around 25 January, the anniversary of the 2011 revolution, said Seif. “The reality every Egyptian living under [president] Abdel Fattah el-Sisi is fearing is the moment Egypt got its PR stunt from Cop27 and all the international community and world leaders left and went back to their country, enormous violence will be unleashed on Egyptians.”

The Egyptian government and the Cop27 team have been invited to comment.