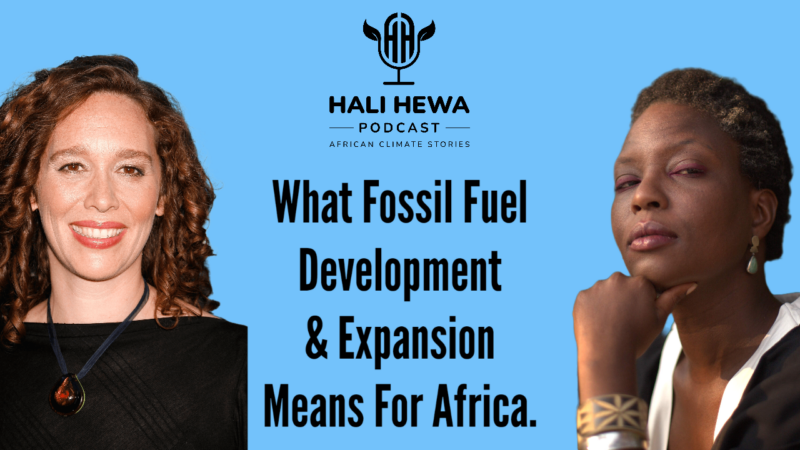 In episode six of the Hali Hewa podcast, Abigael Kima interviews Ina-Maria Shikongo and Tzeporah Berman about the environmental and social cost of a push to exploit oil and gas across Africa.

Ina-Maria Shikongo from Namibia is an artist, fashion designer, activist — and celebrates the power of being an African woman every day. Vowing to stop planetary disaster, she has rallied humans from across the world to stop a Canadian company from drilling for fossil fuels in her country. The Okavango Delta is home to some of Africa’s most ancient communities and the largest surviving elephant herd. Canadian oil & gas company, ReconAfrica, has already begun exploratory drilling in the region.

Tzeporah Berman is a Canadian environment activist campaigner and writer. She has been designing environmental campaigns and working on environmental policy in Canada and beyond for over thirty years. She is currently the international program director at Stand.earth and chair of the Fossil Fuel Non-Proliferation Treaty Initiative. She is the co-founder of the Global Gas & Oil Network, the former co-director of Greenpeace International’s Global Climate and Energy Program, and the co-founder of ForestEthics (now Stand.earth).

In 2019, Tzeporah received the Climate Breakthrough Project Award which aims to drive breakthrough global strategies on climate change, and in 2021 she gave a widely-viewed TED Talk presenting the case for a global treaty to phase out fossil fuels.

In this episode, Ina-Maria and Tzeporah both speak to their individual experiences as frontline environmental and climate defenders. They share their views about what fossil fuel development and expansion implies for countries across the African continent, and Ina-Maria tells us about a new oil well in the Okavango Delta (a Unesco world heritage site) that is threatening an entire ecosystem.

The conversation is rich and wide-ranging, unpacking concepts like petro-colonialism, and explaining why so many people believe so strongly that projects like the controversial East Africa Crude Oil Pipeline (EACOP) should not be a part of Africa’s energy development.

Tzeporah tells us about the Fossil Fuel Non-Proliferation Treaty campaign and why African leaders, organizations and individuals might want to support the initiative. And she helps us to join the dots between Russia’s illegal war in Ukraine, the rush to develop gas in Africa and the new civil society campaign “Don’t Gas Africa”.

Ina-Maria and Tzeporah sign off the show by sharing what they want the upcoming Cop27 climate conference in Egypt to deliver. Enjoy the show!

Find all episodes of the Hali Hewa podcast here.