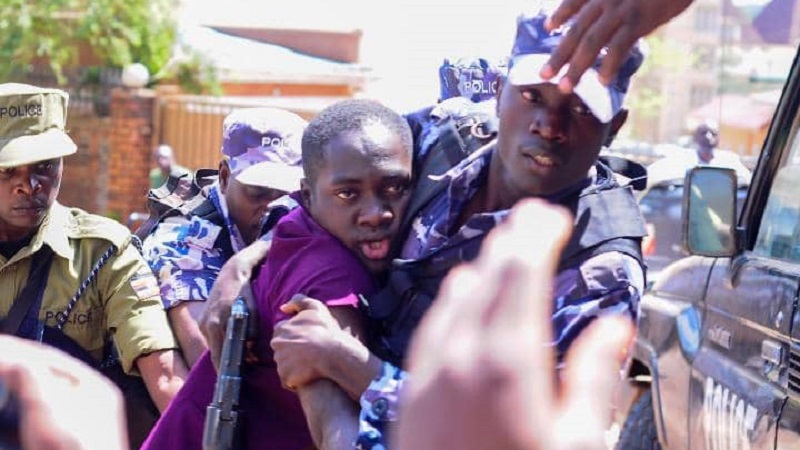 Protester Lubega Nsamba, whose arm was allegedly broken by police, is arrested outside the EU's embassy (Photo: Apple Lenz)

About 50 protesters delivered a petition to the European Union’s embassy in Uganda’s capital Kampala yesterday.

The arrested protesters are being held in the maximum security Luzira prison until they appear in court on Monday, charged with “common nuisance”, Solomon said.

The European Union has called for the demonstrators’ release. In a tweet, its embassy said it “values democratic debates” and has received petitions from Ugandans who both support and oppose the pipeline.

Police did not intervene in a student demonstration last week defending oil development against this resolution, the Stop Eacop campaign claims.

EU is a strong believer of freedom of expression & demonstration & values democratic debates. As we received petitioners against @Europarl_EN in 🇺🇬, we welcomed those in favour. We call on @PoliceUg to release students arrested today as they demonstrated in front of our 🇪🇺 office pic.twitter.com/YbdO2Y3YdM

Solomon said that the European Union embassy’s head of cooperation Caroline Adriaensen told security guards to open the gates and let him and fellow protester Liz Nyanzi in to deliver their petition.

“The others that remained outside immediately were arrested,” he said.

‘They are killing me’

Footage captured by NTV Uganda shows Solomon in a green, yellow and black shirt speaking to the press and then protesters fleeing when threatened with arrest.

One of those caught by the police shouts “they are killing me” and screams as officers restrain him.

Solomon said that this was the first protest against Eacop in East Africa as campaigners face intimidation and fear arrests.

Eacop is a proposed 1,433 km oil pipeline to take 230,000 barrels of oil a day from oil fields in Uganda to the Tanzanian coast for export.

French company Total Energies and the China National Offshore Oil Corporation are leading on the project, supported by the Ugandan and Tanzanian governments.

Solomon said he opposed Eacop because of the risks it poses to Uganda’s forests and rivers and because the project is secretive, will displace thousands of people and mainly benefit foreign companies.

The pipeline route runs through a number of sensitive ecosystems and wetlands of designated international importance.

Because of its low sulphur content, the oil transported by the pipeline will require heating above 50C to flow.

When burned, the oil will emit 33 million tonnes of CO2 a year, according to NGOs’ calculations. That’s equivalent to the national emissions of Zimbabwe.

Patrick Onyango, a spokesperson from Kampala Metropolitan Police told NTV Uganda: “The protesters did not seek police clearance to demonstrate. We had to adjourn their illegal demonstration.”

In 2020, Uganda’s constitutional court nullified a law that gave police sweeping powers to break up protests. Amnesty International reports the authorities continue to criminalise activists with no legal basis.

Total Energies did not reply to a request for comment.