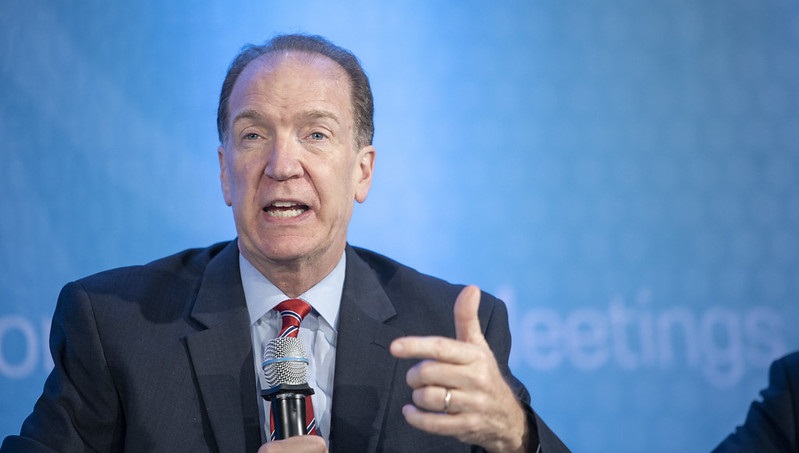 The US government is under pressure to force out World Bank president David Malpass, after the Donald Trump-appointed banker repeatedly refused to say whether burning fossil fuels is warming the planet.

Asked during an event on the sidelines of the UN general assembly on Tuesday whether he accepts the scientific consensus on global warming, Malpass repeatedly dodged the question before eventually responding: “I’m not a scientist”.

The exchange followed comments by former US vice president Al Gore who had called Malpass a “climate denier” and said he should be fired.

Jochen Flasbarth, the top civil servant in the German development ministry, has tweeted that Germany is “concerned” by the comments and “needs clarification by the bank”.

We are concerned about this confusing signals about scientific evidence of #climatechange from the top of ⁦@WorldBank⁩. Policy and programming of the bank need to be fully based on the findings of ⁦@IPCC_CH⁩. Needs clarification by the bank! https://t.co/QcHiYbVI36

Faced with such public outcry, Malpass has sought to walk back on his comments and blamed “political motivations” for the criticism of him.

In an interview with CNN on Thursday, he said: “It’s clear that greenhouse gas emissions are coming from man made sources, including fossil fuels, methane, agricultural uses, industrial uses. So we’re working hard to change that. I’m not a denier and I don’t know why that message, it gets tangled up and I’m not always good at conveying the exact message”.

In an email to World Bank staff after the CNN interview, seen by Climate Home News, Malpass said: “It’s clear that greenhouse gas emissions from human activities are causing climate change, and that the sharp increase in the use of coal, diesel, and heavy fuel oil in both advanced economies and developing countries is creating another wave of the climate crisis. Anything seen in a different light is incorrect and regrettable”.

But this is unlikely to make the row go away swiftly as campaigners have long criticised the World Bank’s climate record under Malpass and the Biden administration’s concerns with Malpass pre-date his latest comments.

Before Malpass’s comments, US climate envoy John Kerry was asked if the Biden administration had faith in Malpass. He said that was “the president’s decision” but went on to criticise the World Bank’s climate record.

While the World Bank president is officially chosen by the bank’s board of governors, in practice he must have the backing of the US, the bank’s largest shareholder.

Sonia Dunlop, E3G’s lead on public banks, told Climate Home News: “If the White House and the US treasury started communicating that they no longer have confidence in David Malpass as president of the World Bank and they started applying political pressure, his job would become politically untenable, he would resign and they would replace him with someone new”.

Rachel Kyte, the bank’s former vice-president for sustainable development, tweeted that the comments were “another headache for [President Joe Biden]”.

Malpass was appointed by former US president Donald Trump in April 2019 and his five-year term ends in April 2024. But there is precedent for World Bank presidents to leave the job early.

Malpass’s predecessor Jim Kim was nominated by president Barack Obama but resigned early under the Trump administration to join the private sector.

In his resignation letter, he said he was leaving to make a bigger impact on climate change and the infrastructure deficit. A month before his resignation, he had been planning major climate spending.

Under Malpass, the World Bank reportedly watered down a joint climate statement with other banks ahead of the Cop26 climate summit. In Glasgow, it refused to sign on to a pledge to end financing for fossil fuels.

The bank targets only 35% of its finance to projects to tackle climate change whereas several other multilateral banks target 50%.

This article was updated on 22 September to include Malpass’s comments to CNN and his email to World Bank staff and to include the World Bank’s statement.