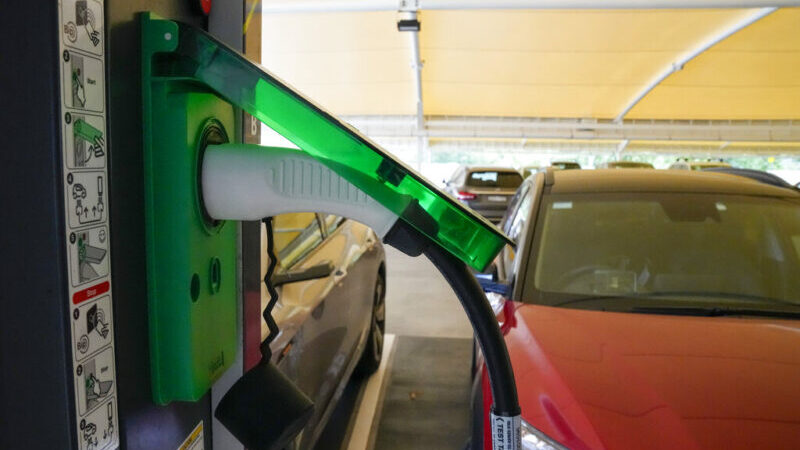 An electric car gets charged at a supermarket carpark in Sydney, Australia (AP Photo/Mark Baker, File)

By Associated Press and Megan Darby

Australia’s parliament on Thursday enshrined in law the government’s elevated target of reducing greenhouse gas emissions by 43% below 2005 levels by the end of the decade.

The Senate passed legislation supporting the target in a vote of 37 to 30, even though several senators who supported it wanted a more ambitious 2030 target.

The center-left Labor Party government officially committed Australia to the 43% target after it came to power for the first time in nine years at May elections. But entrenching it in law has made it more difficult for any future government to reduce the target.

“The message to investors is that Australia is open for business,” Bowen told Parliament.

The conservative opposition party voted against the bill. The opposition has advocated since 2015 a target of reducing emissions by between 26% and 28%.

Independent senator David Pocock insisted on several amendments touching on transparency and accountability before he supported the bill.

Greens party senators supported the 43% ambition although their proposed amendments to increase the target to at least 75% and ban future Australian coal and gas projects were defeated.

Environment minister Tanya Plibersek tweeted: “The decade of climate wars is over.” It was a reference to how heated and divisive the issue had become.

Analyst and writer Ketan Joshi responded that such celebrations were premature, “while a slew of new coal/gas projects get hand-waved through”.

In November 2021, the Australia Institute counted 72 new coal projects and 44 new gas and oil projects under development. These would result in 1.7 billion tonnes of CO2 emissions a year if fully exploited, it calculated – equivalent to 200 coal power stations.

While Plibersek rejected a proposed coal mine near the Great Barrier Reef last month, the Labor government opened up 47,000 square kilometres for offshore oil and gas exploration.

RenewEconomy reported that Labor received half a million dollars from fossil fuel groups in the 2020/21 financial year. The Liberal-National coalition that was in power at the time got almost $675,000.