A herd of “cute” wandering elephants went viral last year as they trekked across China, but UN researchers cite their unusual journey as cause for concern 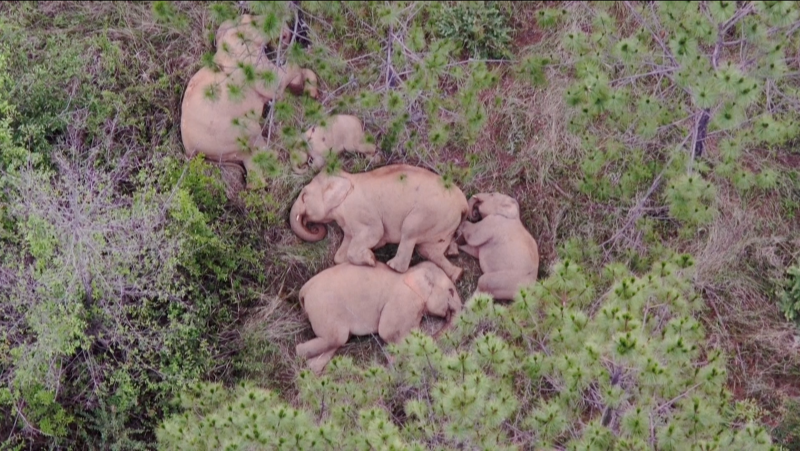 Their suffering was livestreamed. Millions glued to their television and mobile screens cheered as a herd of elephants wandered for seventeen months across China.

The 15 creatures trekked for more than 500 kilometres from March 2020 to September 2021, giving birth to two calves along the way.

On social media, their images and videos went viral. Users romanticized their ordeal and gushed over the “cute” explorers. Reporters framed the unusual dispersal as a mystery.

“These wandering elephants may look cute, but they were in a complex situation,” says Jack O’Connor, lead author of the UN University’s second Interconnected Disaster Risks report. It elaborates on the crisis behind their unusual journey.

The report released on Wednesday lists 10 disasters including Taiwan drought, vanishing vaquita and Tonga eruption, to explain how the root causes are connected and explore solutions.

In the case of the wandering elephants, they identified gaps in conservation and biodiversity practices region and globally, says O’Connor. “Maximizing the number of animals without the right conservation approach triggered human-animal conflict and crisis inside the reserve.”

In March 2020, the reserve was facing extreme drought, possibly causing food and water shortages for elephants. The country’s conservation policies focused on boosting the elephant population inside the reserve, which ballooned from 100 in the 1970s to around 300 in 2020.

But their habitat in southern China kept shrinking. Elephants lost 62% of the areas in just three decades due to expanding human settlements and rubber or tea plantations. As a result, they were left with less than 4% of the reserve’s area remaining suitable for their habitat, says the report.

The crisis had been showing its impact for more than two decades, with human-animal conflict intensifying. Since 1991, more than 60 people have been killed during encounters with Asian elephants in Xishuangbanna, with 12 deaths recorded in 2019 alone.

“Some stretches inside the reserve were growing into a state that was fairly densely packed with trees. Elephants couldn’t use this area because they were not able to cross through them,” says O’Connor. “The conservation approach is too simplistic and based on quantity rather than quality.”

Another herd from the same reserve wandered towards a botanical garden, miles away from the urban areas, at around the same time. Their adventure got less public attention.

Two herds of elephants escaping the reserve underlined the dire situation, says conservationist Becky Shu Chen. For many Chinese people, it was the first time they had come into contact with these giant animals.

“Culturally, wildlife, in general, is romanticised and personified, but genuine awe and comprehension of the wildness of nature are missing in China,” she adds.

Such romanticising of wild animals is promoted by the Chinese government. In Chengdu Research Base of Giant Panda Breeding, visitors can cuddle a panda, a vulnerable animal that came close to extinction a few decades back. At Harbin Siberian Tiger Park, tourists can feed the tigers – to the extent that the big cats became obese.

Tourists are rarely told about the threats these iconic animals face, or what they can do to help.

“My doctoral program about conservation communication shows that the most awareness-raising campaigns only provide information and don’t lead to any doable action,” says Shu Chen.

The elephants ended up in Kunming, the capital of Yunnan. Ironically, this is where ministers met on 12-13 October 2021 and agreed to develop an international deal to reverse biodiversity loss. The summit’s venue displayed a sculpture of 15 wandering elephants, to represent what they were trying to protect.

Yet talks on the nature pact have been repeatedly postponed, with ambition hampered by a lack of resources. The Cop15 summit was relocated from Kunming to Montreal, Canada, where a deal is due to be finalised in December.

The herd caused damage worth $1 million on its journey. More than 25,000 people got involved in tackling the chaos.

To prevent a repeat, the UN report recommends expanding the habitat, connecting protected areas and building a natural barrier to prevent elephants from venturing out of the reserve.

“As a local wildlife organization, we have also made a similar recommendation to connect the fragmented elephant range to ease human-elephant conflict,” says Jinfeng Zhou, secretary-general of Beijing-based China Biodiversity Conservation and Green Development Foundation.