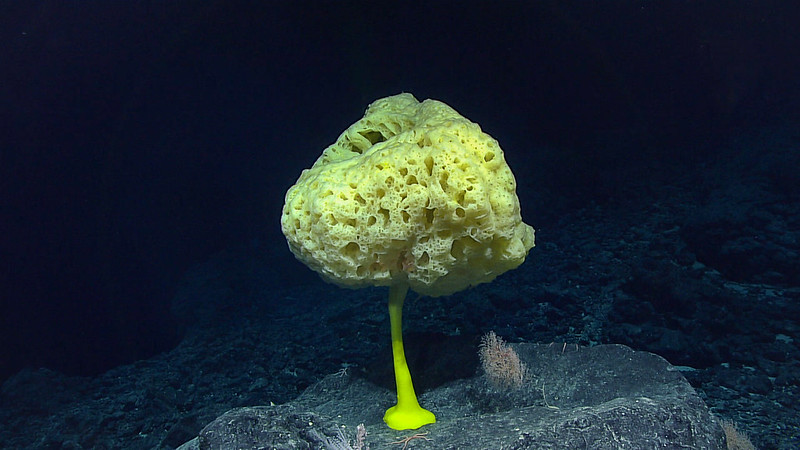 A yellow glass sponge observed at a depth of 2.5km in the Sibelius Seamount in the Pacific (Photo: NOAA Ocean Exploration/Flickr)

A growing number of countries are demanding more time to decide on rules that would allow companies to mine the deep seabed for minerals needed to manufacture batteries for the energy transition.

Countries have discussed mining the bottom of the oceans for years but no commercial extraction has started in international waters. The ultimatum would allow the nascent industry to apply for mining permits as soon as next year.

The move has led to growing calls from nations, scientists and campaigners not to rush the approval of a mining code that risks negatively impacting the deep marine environment, of which still little is known.

During three weeks of meetings at the ISA’s headquarters in Kingston, Jamaica, which ended last week, some member states issued multiple calls for a discussion on the implication of the two-year ultimatum to be added to the agenda.

Chile, Costa Rica, South Africa, Ecuador, Trinidad and Tobago, Italy and Spain were among countries voicing frustration at being forced to negotiate such a complex piece of international law under an artificial timeline.

But the ISA secretary and officials refused to add the issue to the official agenda, stripping the body’s 167 member states of the ability to meet and express their views before the deadline next year.

Between a wolf and its food: as one deep sea miner flops, others eye the prize

Deep sea mining companies have been carrying out exploration of an area of the Pacific Ocean floor, known as the Clarion Clipperton Zone.

There lies a concentration of black mineral concretion, known as polymetallic nodules, which are rich in nickel, cobalt, copper and manganese: minerals critical for manufacturing electric vehicles.

Following the triggering of the two-year-rule, the ISA secretary has rushed to design a roadmap that could allow the nascent deep sea mining industry to begin commercial operations as soon as next year.

Under procedural rules, the ISA will have to “consider and provisionally approve” requests for exploitation licences regardless of whether the mining code is finalised.

Since then, calls for banning the practice have grown. Scientists have warned that far too little is known about the deep ocean, its biodiversity and the role it plays in storing carbon to allow companies to mine the seabed. Mining would result in biodiversity loss “that would be irreversible on multi-generational timescales,” they say.

The Chilean delegation, which formally requested for the implication of the July 2023 deadline to be discussed at the meeting, described it as “an elephant in the room”.

In June, Chile called for a 15-year moratorium on adopting regulations, expressing concerns of environmental damage and the lack of scientific data.

“Are we willing to be accomplices to the unknown and irreparable damages submarine mining might cause?” Chile’s ambassador Constanza Figueroa, asked.

“We are not ready” to allow deep-sea mining, Ecuador’s delegation told the meeting in support of Chile’s call for a moratorium. “If we act with haste, we could put ourselves in irreversible situations with respect to the marine environment.”

“The famous two-year clause does not oblige us to move to the exploitation phase if the environmental measures are not adequate,” insisted a representative from Spain.

Gina Guillen-Grillo, Costa Rica’s permanent representative at the ISA, called for “a precautionary pause” on agreeing the rules.

The Seabed Authority has a mandate to effectively protect marine environment.We don’t have the science to take informed decisions,so how can we authorize to start Mining before we can fully comply to protect our Ocean & its biodiversity. We must apply caution! #PrecautionaryDelay https://t.co/fEjeRmi5MJ

But the ISA didn’t heed the call to allow adequate time to discuss the deadline and its feasibility.

Instead, it relegated the discussion to “any other matters” to be discussed at the end of the meeting. That conversation lasted just about an hour before it was cut short by officials citing time concerns.

As a result, the assembly body of the ISA, which compromises all 167 states, won’t have an opportunity to discuss the issue again before next year’s deadline.

Campaigners have accused the ISA of being blindsided by the pursuit of greenlighting the industry at the expense of protecting the marine environment.

Diva Amon, a deep-sea biologist representing the Deep-Ocean Stewardship Initiative, an observer at the talks, said: “Pushing through regulations without allowing ISA member states and observer organisations to properly debate the mining regulations and the consequences of proceeding without a robust understanding of important but vulnerable deep-sea ecosystems will not be to the benefit of humankind.”