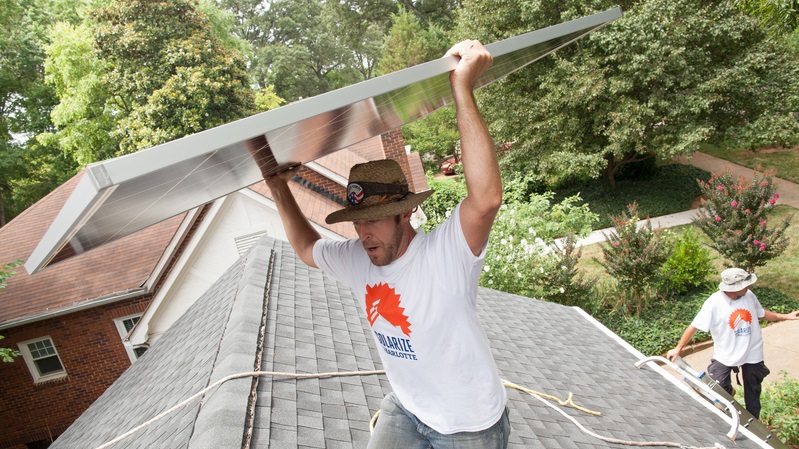 A solar panel is installed on a rooftop in Charlotte, North Carolina. (Photo: Jason Miczek/Greenpeace)

Environmentalists and most of the US solar industry have breathed a “sigh of relief” after president Joe Biden announced he would ease tariffs on solar panel imports from four south-east Asian nations on Monday.

An investigation into solar panel imports from Thailand, Vietnam, Malaysia and Cambodia had effectively frozen the roll-out of solar power in the US, pushing up American electricity prices and the country’s greenhouse gas emissions.

Biden signed an executive order freezing these import restrictions for two years. “That sound you hear is the sigh of relief from thousands of American solar workers and businesses,” responded the head of the Solar Energy Industries Association Abby Hopper. The Coalition for a Prosperous America, a conservative lobbying group, called it a big win for the “climate lobby and Chinese solar exporters”.

Following the decision, Bloomberg New Energy Finance (BNEF) revised their projections for US solar capacity upward by 2GW. The impact is limited by a shortage of solar panels everywhere in the world as supply has not kept pace with soaring global demand, BNEF researcher Jenny Chase told Climate Home News.

For Greenpeace East Asia adviser Li Shuo, the move does not go far enough as it still restricts solar imports from China. Li told Climate Home: "For solar [panels], I can tell you no one is going to be more cost efficient than Chinese products. So if the US wants to build domestic manufacturing capacity, that’s fine, but they will just pay a higher price, which one can argue is a bad thing for climate action."

The decision is the latest move in a decade-long saga in which the US government has balanced its climate plans and the interests of solar installers against its desire to protect US manufacturers from cheap, largely Chinese, imports.

To neutralise these attacks, Obama introduced tariffs on Chinese solar panels. He argued that China was illegally subsiding its industry and dumping products on the market at below cost price. China challenged these tariffs in the World Trade Organisation but lost the case. The tariffs stayed and were renewed and extended by presidents Donald Trump and Biden.

But a US solar panel manufacturing industry did not take the place of Chinese imports. Instead, US solar installers bought their panels from Cambodia, Malaysia, Thailand and Vietnam. In 2021, 85% of solar panel imports were from these four countries.

Outcompeted by cheap imports, a tiny Californian solar panel manufacturer called Auxin Solar made a complaint to the Department of Commerce and hired Washington lobbyists and public relation spinners to make its case.

They argued that Chinese exporters were getting around tariffs by exporting their solar panels through these southeast Asian countries. The complaint referenced data from BNEF and Chase. But she told Climate Home: "We don't sanction their interpretation of it particularly". The SEIA has rebuked Auxin's arguments.

But US commerce secretary Gina Raimondo decided she was legally obliged to open an investigation, which could result in retroactive tariffs on imports. Solar installers stopped importing. Rystad analysts estimated this could have cost the US 17.5GW of uninstalled solar power capacity in 2022.

The SEIA, whose members include the US subsidiaries of Chinese solar panel manufacturers, lobbied against the investigation in Washington DC. They won vocal support from politicians like Senator Jacky Rosen, a Democrat from the solar-reliant, south-western state of Nevada and eventually convinced the Biden administration to act.

The freeze is only due to last two years, during which Biden is hoping to build up a US solar manufacturing industry. His executive order authorises the use of the Defense Production Act, a law designed to help the US win wars, to speed up production of solar panel parts. The federal government will further prioritise US-made solar panels in procurement and has called on state and local governments to do the same.

Proposed legislation known as the Build Back Better bill would provide new tax credits for solar wafers, cells and modules produced in the US but it is being blocked by fossil-fuel-friendly Democratic senators Joe Manchin and Kyrsten Sinema.