The Trudeau Administration is delaying delivery of a promised cap on emissions from the fossil fuel sector, insisting there is no need to curb production 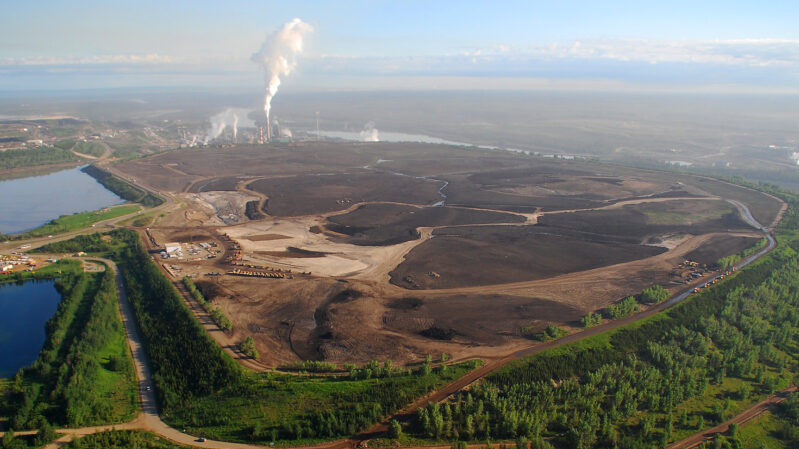 The Canadian government has delayed announcing a cap on the production emissions of its huge oil and gas sector, saying it needs more time to consult with the industry.

Justin Trudeau’s government announced its emissions reduction plan on Tuesday, outlining how it plans to meet its target to reduce emissions by 40-45% between 2005 and 2030.

It predicts that oil production will continue to grow while emissions from oil production fall. Campaigners said this “doesn’t add up” and “bets too heavily on [carbon capture technology]”.

At Cop26, Trudeau told world leaders that the town of Lytton had burned down because of climate change and promised “we’ll cap oil and gas sector emissions today and ensure they decrease tomorrow at a pace and scale needed to reach net zero by 2050”.

But Tuesday’s plan did not include a cap on production emissions from oil and gas. Environment minister Steven Guilbeault said earlier this month that this policy will be deferred to late 2022 or early 2023.

Announcing the plan in Vancouver, natural resources minister Jonathan Wilkinson explained: “We committed to the [oil and gas] sector that we would work with them in a collaborative basis to establish the cap”.

He added: “We will be working with them over the coming months to ensure we put in place an appropriate cap that’s going to work in a manner that will continue to employ people but that will allow us to get at those emissions”.

The way in which the cap is implemented is still up for debate. Guilbeault has said that a cap and trade system is one of the options. This is when a limited number of pollution permits are issued in key sectors and companies that cut their emissions faster can sell unused allowances to those emitting more.

The emissions reduction plan states: “The intent of the cap is not to bring reductions in production that are not driven by declines in global demand”.

Catherine Abreu, director of Destination Zero, told Climate Home it was good that Canada is “finally moving to address the glaring gap in all of its previous climate plans – the oil and gas sector”.

But, she said: “Increasing oil production while trying to reduce oil and gas emissions doesn’t add up… Canadian governments need to ask whether it makes sense to keep ramping up extraction in this critical decade of decarbonisation.”

Measures to reduce emissions without reducing production include tax credits for carbon capture technology and potentially domestic and international carbon offsets for “a small portion of the reductions”, the plan says.

Julia Levin, from the Environmental Defence Canada, said the plan “bets much too heavily on [carbon capture]”.

Jan Gorski, from the Pembina Institute think tank said that the projected oil and gas emissions reductions for 2030 were not ambitious enough. He said that the industry’s fair share was a 45% reduction from 2005 levels by 2030 not the plan’s 31% projection.

His analysis suggests this can be achieved through stopping methane leaks and venting, electrification, carbon capture, facilities reaching their end of life and “other decarbonisation activities for which we do not yet have adequate information”.

While campaigners criticised it, the oil and gas industry welcomed the plan. The Canadian Association of Petroleum Producers said that it “acknowledges that global demand for natural gas and oil will continue for decades and Canada has a role to play in providing lower emission resources to the world’s energy mix”.

According to the International Energy Agency, if the world is to reach net zero by 2050 then oil demand should fall by 75% between 2021 and 2050. Gas demand should decline by 55% over the same period.

Canada is the only G7 country whose emissions are still growing. This is largely because of the growing emissions from its oil and gas production and growth in polluting forms of transport like SUVs. 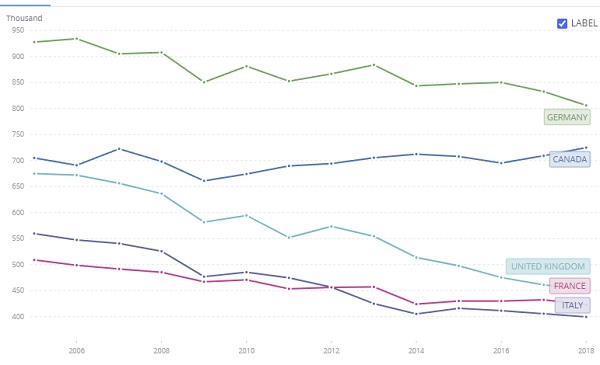 Canada’s Greenhouse gas emissions (kt of co2e) since 2005, compared with G7 European countries. Japan and the US have not been included for visual clarity but their emissions have also fallen. (Source: World Bank)

The plan set interim targets for phasing out the sale of new internal combustion engine passenger vehicles. By 2026, 20% of new vehicle sales should be zero-emission. By 2030, this should be 60% and by 2035 it should be 100%.