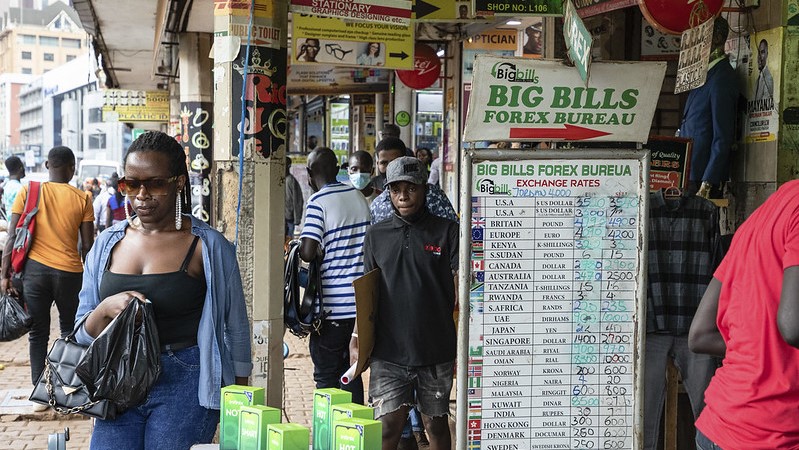 A woman in front of a store in Kampala, Uganda (Photo: IMF Photo/Esther Ruth Mbabazi/Flickr)

Total Energies has greenlit a multi-billion dollar plan to turn Uganda into an oil producer and export its crude through the world’s longest heated pipeline.

The oil major and its partners, the Chinese state-owned oil company CNOOC and petroleum companies in Uganda and Tanzania, announced a final investment decision during a ceremony in Kampala this week.

This includes the development of two oil fields on the shores of Lake Albert and the construction of the 1,443 kilometre East African Crude Oil Pipeline (Eacop) that, at full production, will channel 230,000 barrels per day to the Tanzanian coast for export.

Yet it refused to disclose its financial backers, fuelling speculation the funds are not yet secured.

As investors move away from fossil fuels, and in the face of a global opposition campaign, Total has struggled to secure $3bn in financing it told its shareholders it needs to build the pipeline.

“Total and CNOOC are staying quiet on the crucial question of where the money will come from for their incredibly risky pipeline plans,” said Ryan Brightwell, a researcher at NGO BankTrack. “I don’t see anything to signal that a deal for a loan has been signed.”

In a press release, Total said the project represents a total investment of around $10bn, with production expected to start in 2025 – nearly 20 years after commercial oil was first discovered in Uganda.

It made no mention of how the pipeline will be financed. A spokeswoman for Total told Climate Home the company wouldn’t comment on the funding situation.

Ugandan authorities have repeatedly said they expect the project to propel the country’s economic development. On Monday, energy minister Ruth Nankabirwa wrote on Twitter $15-20bn in investment was expected over the next five years.

Avenues for Total to find the funding are narrowing. At least 11 banks, three insurance companies and the African Development Bank have ruled out supporting the venture.

Brightwell said this would not be the first project to reach a final investment decision without all the finance in place but the strategy was “risky”. A number of these projects, for example the Lamu coal plant in Kenya, were subsequently cancelled.

During Total’s annual general assembly in May 2021, shareholders raised concerns that banks publicly refusing to support the project risked impacting the cost of borrowing for the pipeline.

Total replied that “many international banks have confirmed their interest in participating in this financing” and the project was “economically robust”.

Jeff Mbanga, a communication consultant for oil and gas companies in Uganda, told Climate Home Total had repeatedly delayed giving the project a green light because of the lack of funding.

“We hope that announcing the final investment decision has an implication for financing. We assume it is in place,” he told Climate Home.

But for Brian Atuheire, executive director of the conservation NGO AIFE-Uganda, the signing of the final investment decision was designed to attract financiers after the company “lost credibility” in the face of a global campaign against it.

AIFE-Uganda is one of more than 50 regional organisations to have called on Total to halt the project, warning that the nascent Ugandan oil industry “will not benefit ordinary men and women” but will “leave communities, the country and region at large worse off”.

The pipeline route runs through a number of sensitive ecosystems and wetlands of designated international importance. Campaigners have warned it threatens protected wildlife habitats and water sources for millions of people. Thousands of people are facing displacement and campaigners on the ground opposing the projects say they are being targeted.

Because of its low sulphur content, the oil transported by the pipeline will require heating above 50C to flow. When burned, it will emit 33 million tonnes of CO2 a year, according to NGOs’ calculations.

Total argues that the project is in line with its strategy of only approving developments that are “low-cost and low-emissions”. It told its shareholders that the project would cost the equivalent of $11 a barrel and emit below 20 kg of CO2/bbl to produce.

Some people are worried that our crude oil could Kudiba (not have a market), impossible! I have a shirt that is 65% polyester. When talking about phasing out petroleum, they are referring to fuel for cars, but petroleum will be used for many other things like polyester, etc. pic.twitter.com/zzD1ZI2QAq

CEO Patrick Pouyanné said Total was “fully aware of the important social and environmental challenges [the project] represents” and aimed “to make it an exemplary project in terms of shared prosperity and sustainable development”.

Thom Allen, an oil analyst at Carbon Tracker, told Climate Home that a typical barrel of light crude might produce around 390kg of CO2 when burnt and that “calling an oil project ‘low-emissions’ is a misnomer”.

He added that Total’s claim of low production costs was predicated on the forecast of large production volumes of oil, “which is misplaced as long-term oil demand is set to collapse under the energy transition”.

If countries implement their climate pledges in full, the IEA forecasts oil demand to plateau from 2025 – when Ugandan oil production is due to start – before falling.