Ministers hope Turkish Airlines will make its first biofuelled flight by the end of 2022, but experts are sceptical algae can make much of a dent in aviation emissions 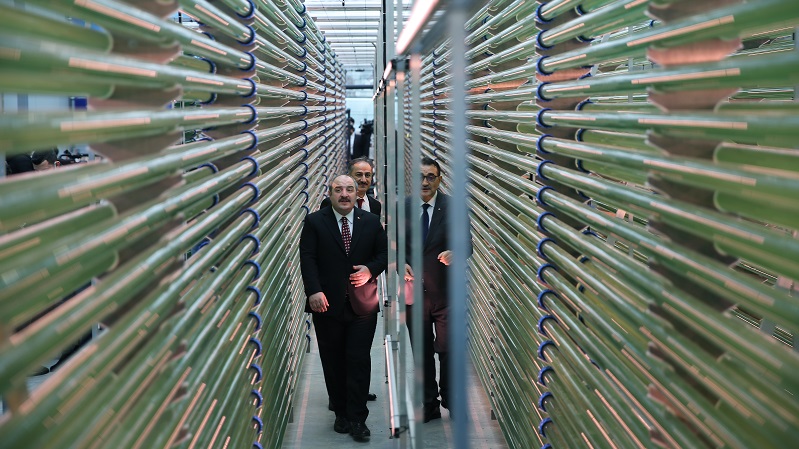 A laboratory to grow algae for jet fuel opened in Istanbul this month, as part of an EU-backed push to cut carbon emissions from flying.

The €6m ($6.8m) demonstration project is funded by the European Union and Turkish government. It will grow simple water-based plants, known as algae, in outdoor ponds and indoor tubes, and refine them into fuel and other products.

After touring the site on Boğaziçi University’s campus and handing out algae-based chocolates to reporters, Turkish energy and natural resources minister Mustafa Varank said: “The work is underway for the use of biofuels produced here by Turkish Airlines. We want [them] to carry out [their] first flight using biofuel from here before the end of 2022.”

Experts told Climate Home News biofuel from algae had potential but expressed scepticism it could be produced on a scale to break aviation’s dependence on fossil fuels.

Dan Rutherford is the aviation director of the International Council on Clean Transportation. He said: “Algae jet fuel is kind of like disco, [it] comes back every decade or so but in a worse form. The US government has been picking at this for at least 30 years and has never figured it out.”

In 2011, a plane flew from Houston to Chicago powered by fuel which was 40% algae-based and 60% petroleum. Solazyme, the San Francisco-based company which developed the fuel, filed for bankruptcy in 2017.

Aviation is a notoriously difficult sector to clean up. Electric batteries, the main solution to land-based transport, are heavy and not powerful enough to keep planes in the sky for long periods.

Biofuels made from plants like soy compete with forests and farms for land. As water-based plants, algae don’t pose that problem – but they still have issues.

The main challenge is competing on price. The price of traditional jet fuel from petroleum has doubled in the past year to $830 a tonne. It is still cheaper than sustainable alternatives, which a McKinsey analysis in 2020 costed at $1,300-3,800/t, depending on the production method.

Berat Haznedaroglu, director of the Istanbul project, told Climate Home he was aiming to get the price down to $1,000/t for algae-derived fuel. He expects interest in clean fuels to grow as governments, airlines and airports try to meet their climate commitments.

“There will be a mandate coming from [industry body] IATA and the governments,” he said, adding that the increased cost of using clean fuels would be passed on to passengers. “I think it’s going to be €10-15 ($11-17) per ticket”.

Brussels-based thinktank Transport and Environment’s aviation director Andrew Murphy said: “EU investment in sustainable aviation fuel (SAF) development in Turkey is a good strategy to bring that aviation market into the scope of its own SAF measures such as ReFuelEU.”

But, he added: “Algae has some concerns due to scalability, so both the EU and Turkey need to fund feedstocks which can be more easily expanded.” For example, he proposed hydrogen derived fuels like e-kerosene.

The Istanbul facility is a university-based demonstration project. It aims to prove the concept, not to become a large-scale supplier itself.

Another limiting factor is the weather. A US energy department study found that algae production rates “vary dramatically from summer to winter, even in places like Florida”. Istanbul has an average maximum daily air temperature in January of 9C (48F).

Haznedaroglu said it would be preferable to grow algae in warmer southern Turkey, but there are cold-resistant forms of algae which survived recent snows in Istanbul. Algae grows in places as cold as Iceland.

The Istanbul facility will produce algae for food supplements, animal feed and fertilisers as well as jet fuel.

Rutherford said: “That’s a recurring theme on biofuels generally for aviation. You start off saying ‘jet fuel’ and then you start producing products and a lot of them are pretty fungible. They end up cosmetics, food, replacing petrochemicals.”

These are more expensive but less likely to be contaminated by pollution. These are used for products like food supplements where avoiding contamination is particularly important.