John Kerry: US supports a coal phaseout but cannot commit

During a trip to Brussels, the US presidential climate envoy told Euractiv in an interview it was unconstitutional to mandate a coal exit for states 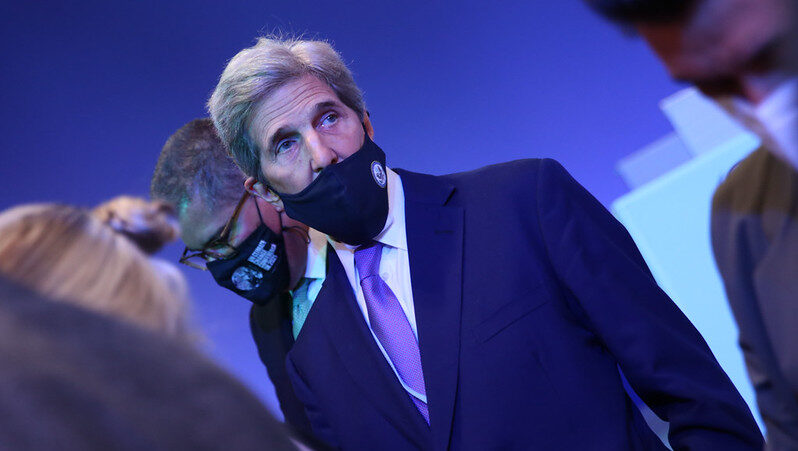 John Kerry is the first United States special presidential envoy for climate, appointed under the Biden administration in January 2021. He spoke to Euractiv’s energy and environment editor, Frédéric Simon.

You were in Brussels to discuss global climate diplomacy after the Cop26 summit last month in Glasgow. How can Europe and the United States convince countries like India, the most reluctant about climate action and resisted language at the last minute on coal? What kind of initiatives did you discuss to bring these countries on board and persuade them to raise their ambition for climate action?

First of all, let me let me just say that India did not want to or could not feel that they could sign on to “phasing out” unabated coal because that’s all they have.

And so they were nervous of that, but they accepted “phasing down” coal in the Glasgow Climate Pact. And this is the first time in the history of Cops – 26 of them – that we have ever had Russia, India, China, other countries that use coal actually talk about “phasing down” coal.

And, to phase out, you have to first phase down. So I’ll take the year of phasing down, providing it’s real. And that we build on that to continue to focus on the need to transition away from fossil fuel dependency – particularly unabated fossil fuels. The key here is that if there’s no capture and no utilisation, and no storage, it’s a problem.

So we are focused together with the EU, with Frans Timmermans, on how we will accelerate mitigation. We have 65% of global economic output committed to keeping the 1.5C degree target of the Paris Agreement alive.

And now we have to move to the other countries that are in the other 35%. Because the reductions don’t have to be made in one year or one meeting in Glasgow – they have to be made over the next nine years, at least that’s what the scientists tell us.

So we can achieve a global reduction of 45% or more and keep the 1.5C target alive. And our effort together with Frans Timmermans is how we can work cooperatively with other countries to get them to accelerate their reduction, increase their targets, and help us achieve the goal of Glasgow, which is now keeping 1.5C degrees alive.

So what kind of initiatives will the EU and the US put forward to persuade these countries then?

Well, let me give you an example. In the case of India, prime minister [Narendra] Modi has committed to deploy 450 gigawatts of renewable energy over the next 10 years; we have formed a partnership with India, together with the UAE and some other countries to help them be able to achieve that goal as rapidly as possible by bringing finance and technology to the table. So Frans and I talked about how we can coordinate and partner in that effort to accelerate that.

In Glasgow, the US was one of the countries which did not sign up to an agreement to phase out coal by mid-century. Can you explain the reason behind this? How can the US persuade others if it is not itself leading by example?

The “phase out” language was one that we couldn’t agree to because of our constitutional capacity. We are already phasing out coal, but we can’t give an instruction under our constitution to the states to make that happen, this is just not constitutional. At least that’s the way our lawyers read it.

So we told everybody – look, we’re not against it, we’re trying to proceed forward ourselves. President Biden has set the very ambitious goal of having a power sector that will be completely carbon-free by 2035. We’ve closed over 500 coal plants in the last seven years. And we will only have 100 left as we go into the next 10 years. And we’ve pledged that by 2035, we will be zero carbon in our power sector.

So we’re doing it, we’re going to do it. We just can’t sign on to something which creates a legal authority we don’t have.

Turning to Europe now, there is a new chancellor in Germany, Olaf Scholz, who was sworn in on Wednesday. And one of the things he suggested earlier this year when he was finance minister was to create a so-called “climate club” that would bring together industrialised nations such as the EU, Japan, and the US to lead the fight against global climate change. What are your thoughts about this? Would the United States be interested in joining such a club?

We’re interested in any and every effort that will accelerate the reduction of the carbon problem and reduce the use of unabated coal.

And to some degree, what we’re doing with a Major Economies Forum, is a kind of carbon club in the sense that these 20 countries represent 80% of global emissions. So we welcome any idea that will encourage increased activity, increased commitment, increased focus, and partnership. And we’re willing to talk about any parameters on how we can do that.

In April next year, we’re going to be having a summit on the subject of increased mitigation. We look forward to building partnerships with Chancellor Scholz, and we welcome his commitment and the leadership of Germany.

I just met five minutes ago with the foreign minister responsible for the climate negotiation, Annalena Baerbock. And we just spent half an hour together in Brussels on the same evening. She is making a tour to meet with her counterparts, and we had an opportunity to talk about the next steps. I think we will be very coordinated and maximise all of our efforts. And that’s what we’re going to do.

Probably what Mr Scholz was referring to is the EU’s proposal for a carbon border adjustment mechanism (Cbam), which will essentially apply a tariff on goods imported from countries that do not put a comparable carbon price on their industry. Do you believe a carbon border scheme such as the European one is a legitimate instrument to have when you consider yourself a climate leader?

Absolutely, and we do. We’re examining it right now; President [Joe] Biden has instructed our team to evaluate all the implications and ramifications fully.

So we’re exploring it like other people. And it may be a tool that we have no choice but to employ if other countries are not going to be serious enough about reducing carbon.

What sort of timeline are you looking at?

It’s in the near term. Because we have important meetings coming this year, and 2022 is the year of developing the details based on CBAM that the EU has put in place, which could take effect in 2023. So that’s going to have to really be worked out in the near term.

And I think the whole issue of carbon pricing, Cbam, and carbon leakage – all of these things will be very much on the table over next year.

The European Union and the US-led an initiative in Glasgow to cut methane emissions. In Europe, the Commission will table a proposal next week to regulate methane leaks from the oil and gas sector. What are the next steps on the US side? Are you planning similar legislation in the US?

We will have domestic regulations on methane, yes. Gina McCarthy and her team in the White House are working on that. And we are planning to do our share of reduction on methane to give life to the pledge that we helped lead. And we will join the EU and others to make sure we’re doing our maximum on it.

We’re huge believers in the methane initiative, which is why we started it with the EU. And we already have 110 countries that have signed on to it.

We just worked out an agreement with China in Glasgow, where China has agreed that next year, they will design and implement and announce publicly an ambitious national action plan on methane, which they have to file with the Cop next year.

And so we’re very anxious to continue to press this. In each of the conversations I’ve had in England in the last few days, in Jordan before that, and now here in Brussels, and I will have these conversations in Paris – we are determined to expand as much as possible this effort on methane.

If we successfully implement the 30% global methane reduction, it’s the equivalent of taking every automobile and every truck and every aeroplane and every ship in the world and reducing them to zero emissions by 2030.

It’s a huge game; it’s 0.2C of savings on the planet’s warming. And it’s also easy and not expensive to do. So it’s low hanging fruit, frankly. And if we can get every country to do their part, we might exceed the 30%, which would be monumental. So we’re going all out on the methane pledge.