Frustrated by a lack of recognition of Africa’s special needs on climate, advisers are calling on national leaders to unite behind a common agenda in Sharm el-Sheikh 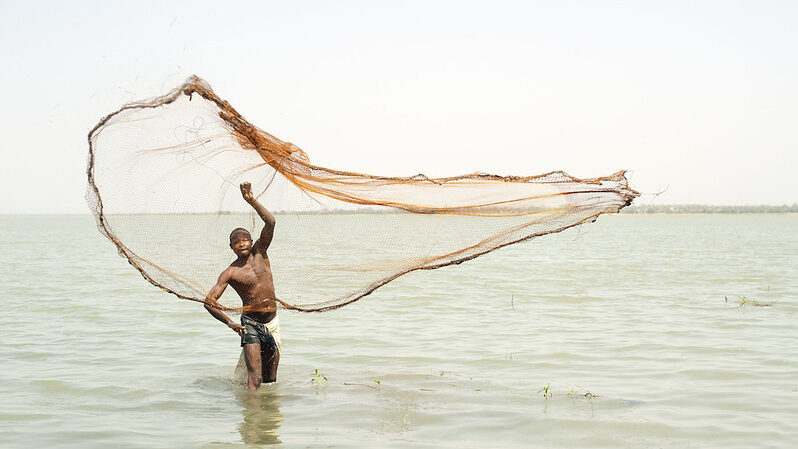 A fisher casts his net in northern Ghana, where climate change is affecting the catch (Pic: Hamish John Appleby/IWMI)

Africa has been trying for years to get its special needs and circumstances officially recognised in UN climate talks, without success. The bloc left Glasgow last month disenchanted once again.

The African Group of Negotiators (AGN) wants a formal agenda item to cover issues like the continent’s vulnerability to extreme weather and high borrowing costs. So far, what they have got is informal consultations.

With Egypt set to host the next UN climate summit in 2022, there is a chance to make a breakthrough – but African negotiators and advisors say it will not be easy.

“Africa is lagging in education, access to water, energy, and in extreme poverty – indictors that Africa needs to have special treatment,” Egyptian ambassador and former chair of the AGN Mohamed Nasr told Climate Home News. “The special treatment does not mean that Africa will access more money, but it’s about facilitating access to finance and making finance cheap because the more high risk a country is, the more the cost of loans it accesses.”

The coronavirus pandemic has driven many vulnerable countries deeper into debt, making it harder to invest in clean energy and resilience to climate extremes.

Kamal Djemouai, an Algerian climate change consultant and adviser to the AGN, said the special needs agenda often ended up getting traded off against other negotiating priorities. “It will be difficult to get the agenda recognized despite it being among the most important issues for Africa,” he said.

It doesn’t help that the 54 African nations are not all equally invested in the goal. More than half – 33 – are members of the least developed countries (LDC) group, under which they are already prioritised for some kinds of international support.

But the whole continent needs space to develop and support to do so sustainably, said Nasr. “The challenges are increasing due to climate change. We are not competing on vulnerability. We want to ensure the policy space for Africa to develop in the right way and ensure that Africa gets its fair share of the finance.”

Frustrated by the stasis, some experts are calling for the African Union to step in, bringing higher level political clout to the issue.

“Africa’s position is sidelined on the final decisions taken at the UN conferences on climate change,” said Djemouai. “African ministers need supporting and strengthening at the highest political level by the heads of states at the African Union level to ensure balance in negotiations.”

Alpha Kalogo, a Guinean advisor to the AGN chair on loss and damage, agreed. “AU should appoint a climate change champion who will act as the African spokesperson pushing the African position at the annual UN climate summits. The political approach uniting Africa will help streamline the LDCs’ sometimes very passive [stance] when it comes to the African circumstances agenda,” he said.

Kaloga added that Africa should organize itself through the African Ministerial Conference on the Environment (AMCEN) and the AU moving to get at least between 15-20 ministers attending the meetings.

While several African politicians attended Cop26 in Glasgow to make statements, Kaloga said only three ministers – from Gabon, Kenya, and Egypt – negotiated to the end.

“Sometimes, the ministers attending can be reluctant to push for the African position because of their national interests. But the AU champion would be bound by the AMCEN and the AGN position but not national politics. It would ensure a united African voice at the Cops,” said Kaloga.