Public funding of $25 billion to airports generated little controversy despite flying’s outsized climate impact, in contrast to the European discourse 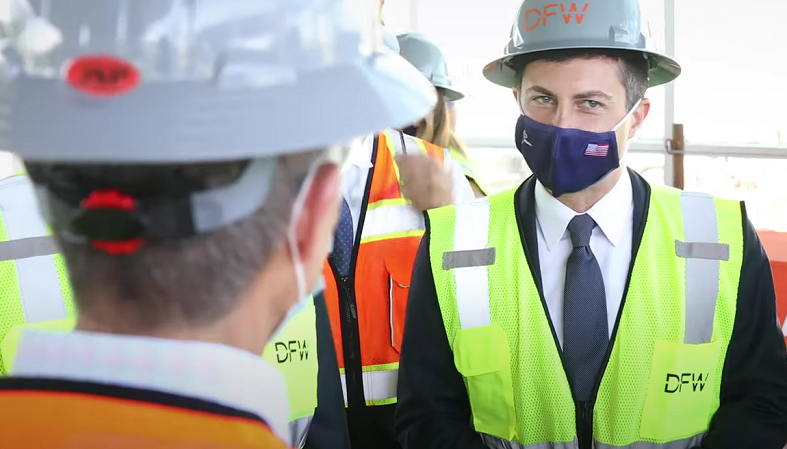 The US government has agreed to hand $25 billion to airports in the next five years, implicitly supporting an increase in flights despite the climate and health impacts.

The $550bn bipartisan infrastructure bill was signed into law last month after intense negotiations between Congress Democrats and Republicans. It includes spending on green transport like $66bn on rail and $7.5bn on electric vehicle chargers as well as $25bn for airports.

Announcing the spending, the Biden administration said: “The United States built modern aviation, but our airports lag far behind our competitors. According to some rankings, no US airports rank in the top 25 of airports worldwide.”

Speaking at Dallas Fort Worth airport after meeting airline executives, transportation secretary Pete Buttigieg said that the bipartisan infrastructure law was “an investment in climate equity”.

Campaigners, on the other hand, said airport expansion could be “a big problem for the climate” and hurt the health of millions of Americans who live, study and work near airports. But unlike in Europe, it has not generated significant controversy, reflecting a lack of low-carbon alternatives to travel long distances.

The Federal Aviation Administration (FAA) says it will spend $15bn of the $25bn on projects that increase safety and expand capacity. Eligibility is defined under the Airport Improvement Grant criteria.

The Federal Aviation Administration is a government body which regulates aviation. (Photo: FAA/screenshot)

Projects funded by the most recent round of these grants include a new airport in Kentucky (the state’s 60th), new and extended runways in Colorado and Indiana and an expanded terminal building in North Carolina.

Sarah Burt, an environmental lawyer at Earthjustice, said that if the money was used to increase air traffic without improving the efficiency of aviation “then that is obviously going to be a big problem for the climate”.

For international flights, carbon dioxide emissions from US commercial aviation have more than doubled since 1990. For domestic flights, they’ve grown 22%.

Together, they are responsible for around 216 million metric tonnes of carbon dioxide, more than the total annual emissions of Bangladesh.

Vera Pardee, a lawyer working on clean air litigation for the Sierra Club, said that airport expansion would hurt the health of people who live near airports.

“It is shocking to improve the facilities inside while doing nothing about the effect of the pollution that is generated outside,” she said.

Over five million Americans live and 163,000 Americans go to school within 500 metres of an airport perimeter, according to the US Environmental Protection Agency.

Aircraft noise also has “all kinds of different health ramifications”, she added.

While many of Biden’s green infrastructure spending plans were scaled down during negotiations with Republicans, airport funding remained at $25bn throughout.

Politically, the aircraft and engine manufacturers and airlines are a powerful lobby group.

Last year, a House of Representatives committee investigating the tragic 2019 Ethiopian Airlines crash accused the FAA of getting too cosy with plane-builder Boeing and missing the warning signs.

The FAA’s boss Stephen Dickson was a senior executive at Delta Airlines before Donald Trump appointed him as the aviation regulator’s administrator.

The FAA released a plan this year for a net-zero emissions US aviation system by 2050. It relies on carbon offsets, using more sustainable fuel, increasing aircraft efficiency and cutting airport emissions. There is no suggestion of curbing demand for flights.

Critics of offsets argue that getting developing countries to reduce emissions so that Americans can keep flying is unfair and that the offset projects often don’t deliver the benefits they claim to.

On Thursday, a United Airlines jet claimed to be the world’s first to run one of its engines on 100% sustainable aviation fuel, derived from organic waste. But such fuels are expensive and there are concerns that scaling up production would entail growing crops for energy that competed for land with food sources and forests.

According to a Journal of Air Transport Management study, this has led to many US airports, like Denver, Orlando and Miami, expanding while still relatively far from capacity.

Despite its climate impacts, US and European aviation campaigners said the bill’s airport spending has not received the level of protest which similar measures in Europe have.

US-based E3G senior associate Alden Meyer said: “There are concerns around expansion in some local areas but it’s more related to the noise and congestion than it is climate-driven.”

In Europe, the concept of “flight shame” has taken hold, with travellers opting to stay home or travel over land – since before the coronavirus pandemic led to wider restrictions. The term originated in Sweden and was popularised by teen activist Greta Thunberg, who sailed from the UK to New York for the United Nations general assembly in 2019 to avoid flying.

European campaigners have focussed on cancelling airport expansions and increasing taxes on aviation to reduce the number of kilometres flown rather reducing per-kilometre emissions.

In February, the French government cancelled an expansion of Paris’s main airport on climate grounds. A battle over plans to add a third runway to London’s Heathrow Airport has been making UK headlines for nearly 15 years.

UK-based anti-aviation campaigner Leo Murray said the US is “sadly lagging many years behind the UK public and political discourse” on this issue.

Brussels-based campaigner Andrew Murphy pointed out that the European Investment Bank had agreed to end financing of airport expansion, adding that the US “bailout for airports will only drive emissions from the sector higher”.

There is less of a history of anti-airport activism in the US, where taking a train instead is only an option on a limited number of routes.

US campaigners have focussed on reducing emissions per flight. Burt and Pardee are challenging the Biden administration’s acceptance of Trump-era plane emissions standards which Pardee said “do absolutely nothing” as they are “12 years behind business as usual”.