As Cop26 car pledge underwhelms, delegates ask: where are the bikes?

At transport day in Glasgow EVs were given centre stage, in what campaigners said was a missed opportunity to promote public transport and active travel 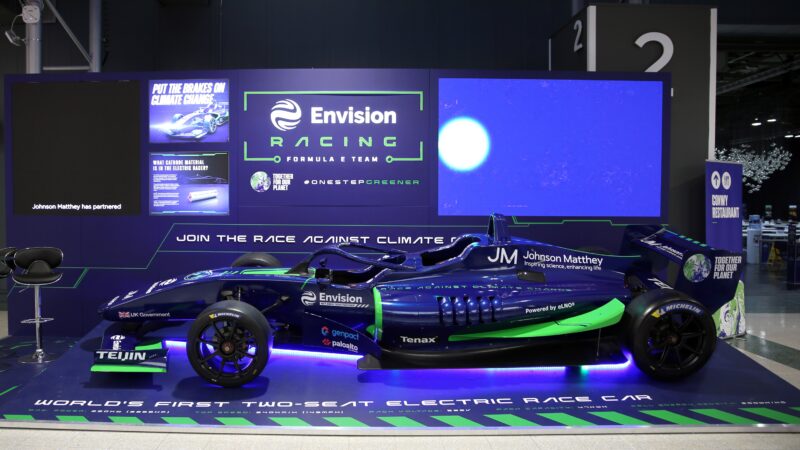 A Formula E car has pole position in the corridor of the Cop26 venue (Pic: IISD/ENB Mike Muzurakis)

In the central corridor of the Cop26 venue in Glasgow, UK, there is a huge electric racing car, underneath a sign which says: “Transport is responsible for 29% of global emissions.”

Electrifying the car industry took centre stage on “transport day” of the climate summit, in line with UK prime minister Boris Johnson’s slogan for the summit of “coal, cars, cash and trees”. There were also headline events on decarbonising shipping and aviation.

But an announcement on phasing out the internal combustion engine on Wednesday underwhelmed – leading many delegates to question why bikes, buses, trains and walking had not been given higher billing.

While a group of governments and companies signed up to eliminate new car emissions by 2040, the world’s top two automakers and major markets Germany, China and the US were not among them.

In European cities, choosing a bike over a car for one journey a day cuts an average person’s transport emissions by 67%, according to research by the University of Oxford.

Outside the conference centre, campaigners gathered on their bikes, calling for increased funding in public transport as well as walking and cycling paths.

How much focus will there be today on #transport day at #COP26 on #bikes #cycling #mobility shift #publictransport #buses #trains or will it be all about #cars? We can’t just replace petrol/diesel cars with #ElectricVehicles pic.twitter.com/A29yfKKXN8

“I’m genuinely shocked by the absence of active travel in the COP26 transport discussions. Decarbonising road transport is a key part in tackling the climate crisis. We need fewer motor vehicles and those we do have, need to be cleaner/greener,” Will Norman, the mayor of London’s walking and cycling commissioner, said on Twitter.

“So unbelievably disappointing and elitist to present EV cars as the solution,” tweeted Sophie Eastwood.

Public transport must double in cities over the next decade to meet the 1.5C target, according to analysis by C40 cities published on Wednesday.

Daniel Firth, transport and urban planning director at C40 Cities, told Climate Home News: “If we stopped the sale of fossil fuel vehicles tomorrow it would take 15-20 years to have 100% [zero emission vehicles] because of the time it takes to change the whole fleet. So it would take too long if that was our only strategy. Whereas we could start putting in bike lanes and bus lanes tomorrow.”

“At the political level, leaders must confirm that the solution to reducing emissions needs to be a package that includes the electrification of vehicles, public transport and cycling,” Swarttouw said. “It’s not either or.”

The coronavirus pandemic led to a huge surge in cycling. In the UK, miles cycled per person increased by 62% during 2020, the highest levels since 2002. Each kilometre travelled by bike instead of car saves an average of 150 grams of CO2 emissions, according to the UN Environment Programme. “You could reach half a tonne over the year,” said Swarttouw.

Transport week at #COP26 so I think it’s time we started talking VERY LOUDLY about this wonderful crisis-beating machine and what it can give us all 👇 https://t.co/VCPDFms7mt

Increasing investment in green public transport, cycling and walking is part of the UK government’s 10-point plan for a “green industrial revolution, along with accelerating a shift to zero emissions vehicles. A spokesperson for the Cop26 presidency had not responded to Climate Home’s questions at time of publication.