After expensive and difficult journeys to Glasgow, many delegates are excluded from negotiating rooms and can only watch an unreliable webcast 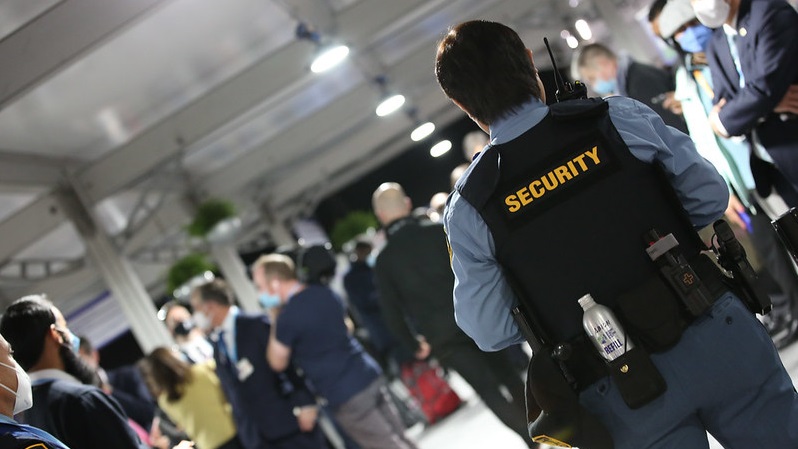 Covid restrictions have placed limits on who can attend negotiations (Photo: Kiara Worth/ UN Climate Change)

Campaigners awarded the UK and UN organisers of Cop26 the ironic “fossil of the day” on Monday as frustrations boiled over at cost and logistical barriers to meaningful participation.

To prevent the spread of Covid-19, access to negotiating rooms has been tightly restricted, leading negotiators and observers to complain that they have travelled across the world just to watch a malfunctioning webcast.

On both Monday and Tuesday, as world leaders spoke on stage, delegates were sent an alert to say the venue was nearing capacity and encourage them to work remotely.

In a statement, Climate Action Network (CAN) said: “People who’ve invested time and resources to travel to Glasgow have waited patiently only to find there is ‘no room at the inn’ for civil society and told to ‘join events online’ – to then find they were offline.”

Adrián Martínez, director of La Ruta del Clima from Costa Rica, said his team had overcome major logistical hurdles to get to Glasgow and advocate for human rights. In the crowded venue, they have had to sit on the floor and been unable to influence or even reliably follow the decision making process.

“This is not an inclusive Cop, completely the opposite,” said Martínez.

It’s beyond a joke – the #COP26 venue has now reached capacity. It’s like trying to get into a late night club – ‘sorry mate, it’s full’ ‘one in, one out’. The UK Govt should reimburse all the 1000s of people who paid ££ to come to Glasgow & sit in hotel rooms. pic.twitter.com/qB34JeKIxJ

National representatives get just two seats in each negotiating room, making it harder for the appointed spokesperson to access technical advice during a meeting.

CAN spokesperson Hala Kilani told Climate Home News that CAN and the Global Campaign to Demand Climate Justice, which between them represent hundreds of civil society organisations worldwide, share four tickets across all negotiating rooms.

The biggest negotiating room at #COP26 has space for 144 people.

There are 197 Parties to the UNFCCC.

Who thought that was going to work?

Cop-goers also complained about the online system. Colin McQuistan, from the aid agency Practical Action, said: “The online system was difficult to access yesterday, many people were unable to log in. Today, things seem slightly better although the internet for virtual participants keeps dropping and hence [we] keep missing sections of the discussions.”

Those that have made it to Cop26 have overcome major obstacles: Covid restrictions, an accommodation shortage, travel disruption caused by a tree falling on the main train line from London and long and unruly queues to get into the venue.

“We are working tirelessly to ensure an inclusive, accessible and safe summit in Glasgow,” a Cop26 spokesperson said. “This includes ensuring the Cop26 venue is fully accessible to all, working with our hotel provider to ensure affordable accommodation, offering voluntary vaccinations for participants and minimising wait times as much as possible.”

On Tuesday evening, the organisers sent an email to participants apologising for the inconveniences of accessing both the physical and virtual spaces.

They cited “exceptional and unprecedented logistical circumstances” coupled with “unprecedented interest” in the conference and noted that the world leaders’ summit required extra security arrangements.

“With your support and understanding we remain confident that we can achieve the best possible outcomes here at Cop26 in Glasgow for people and the planet,” they wrote.

The UN official participant list shows that several climate vulnerable Pacific islands have not sent delegations to Glasgow including Vanuatu and Kiribati. Others, like Micronesia, have sent much smaller delegations.

Ralph Regenvanu, opposition leader of Vanuatu told the Guardian this was “a big issue for the Pacific, the fact that we will not be able to be there in person as we would like”.

He added: “If we go back to Paris [Cop21], it was the personal presence of Pacific leaders that really made a change and brought us to the 1.5C figure that we have now in the agreement.”

In the months leading up to the summit, the UK government was telling countries on its “red list” that their delegations would have to quarantine for five days on arrival in the UK.

The cost of this was estimated at around £2,285 ($3,164). The UK government eventually agreed to cover this cost. It later reduced and then abolished the red list – but the uncertainty dissuaded many from attending.

Three weeks before the summit, the “red list” was scaled back to seven Latin American and Caribbean countries. One of those was Peru, where Practical Action’s global communications officer Silvia María Gonzales travelled from.

She told Climate Home News that, on arrival in Birmingham airport after a long journey from Lima via Amsterdam, UK border guards were reluctant to accept that she was allowed to come to the UK from a red list country despite her having permission to do so for Cop26.

When she eventually got through security, Gonzales was expecting to be picked up and taken to her quarantine hotel by someone from CTM Travel, a company which the UK government had outsourced the responsibility to.

But, when she got into the empty airport terminal late on Sunday night, there was nobody to pick her and her colleague up. Airport police asked them to leave but they refused and stayed in the terminal until 3am when their British colleagues arranged for them to be picked up and taken to their hotel, a two hour drive away at Gatwick airport near London.

“I was hoping to hit the ground running and not start with that level of exhaustion”, Gonzales said.