Prime minister Narendra Modi has big plans for palm oil cultivation. But the experience of farmers in Mizoram state does not bode well

Sisters Hnaingaiha, 23, and Sangi Masseli, 28, work at their father’s palm oil plantation in West Phaileng, a village tucked away in the lush green hills of Mizoram state in northeastern India.

Every morning at 6:00 Hnaingaiha and Sangi walk for an hour to reach the farm. They spend all day cutting fruit from the palm trees and carrying it to trucks waiting to transport the crop. It’s back-breaking work for low pay. One kilogram of palm oil is sold for just 5.50 rupees ($0.07).

“It’s too tough for the women to work here. Even if we are not well we have to work here to save our father from the expensive labour rates. It requires a great amount of energy to work in palm oil,” Hnaingaiha told Climate Home News.

Prime minister Narendra Modi has big plans to expand palm oil production in the region, saying it can be a “gamechanger” for the economy and boost the nation’s self-reliance. But in areas that have pioneered palm oil production, it has brought little wealth at a heavy cost for the environment and workers.

Experts warn that the policy is likely to drive deforestation, putting India’s wildlife and climate goals at risk, while disempowering women.

“We can grow palm if we get a good remuneration from the government and the industry,” said Sangi. “I hope Modi’s new scheme for palm oil in the Northeast increases the product cost and helps us with roads and water.” 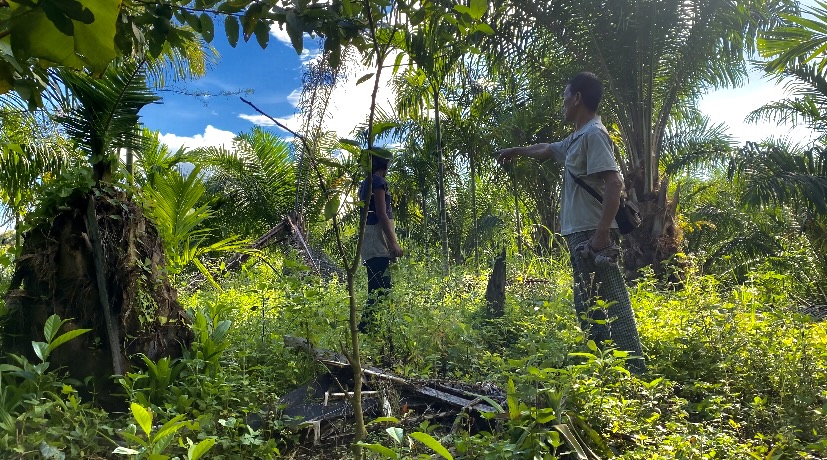 On 15 August, on the eve of India’s 75th year of independence, prime minister Narendra Modi in announced the National Mission on Edible Oils to increase the domestic production of palm oil in the northeastern states of India.

“Today’s Cabinet decision on National Mission on Edible Oils – Oil Palm will be a game-changer when it comes to helping oil palm farmers and creating an Aatmanirbhar Bharat,” Modi tweeted, referring to his vision of making India a self-reliant nation. “The Northeast, and Andaman and Nicobar Islands will especially benefit from this.”

India is the world’s largest consumer of palm oil, which is used in many different products, including ice cream, bread and soap. During 2020-21, India imported $5.8 billion worth of palm oil. India’s palm oil imports drive 23% of the total global demand from plantations in Malaysia and Indonesia and are a major contributor to deforestation and biodiversity loss in these countries, according to WWF.

To reduce its dependence on other countries and lower its import costs, India plans to drastically increase its palm oil production in the northeast of the country, where the weather conditions are favourable. The government is investing 11,040 crore rupees ($1.5 billion) over the next five years to expand palm oil plantations by 6,500 square kilometres across the country. Over half of this expansion will take place in northeastern states.

On 5 October, at a summit on palm oil cultivation for the northeastern states, the minister of agriculture and farmers’ welfare Narendra Singh Tomar said the plan would turn India’s northeastern states into the “palm oil hub of the country”.

He mentioned Mizoram’s role in bringing success to the national scheme, as a pioneering state in the cultivation of palm oil.

Officials say they want the cultivation to only take place on land already owned by farmers, but environmental campaigners are sceptical and have raised concerns that the expansion will fuel deforestation in a region which has already experienced high rates of forest loss.

They say it is likely to lead to groundwater depletion and biodiversity loss in northeastern states and warn that it undermines India’s ambitious tree-planting goal and it’s emissions reduction targets. The government has set a target of having 33% of its land under tree cover, as part of its National Mission for a Green India, and has pledged to restore 26 million hectares of degraded and deforested land by 2030. 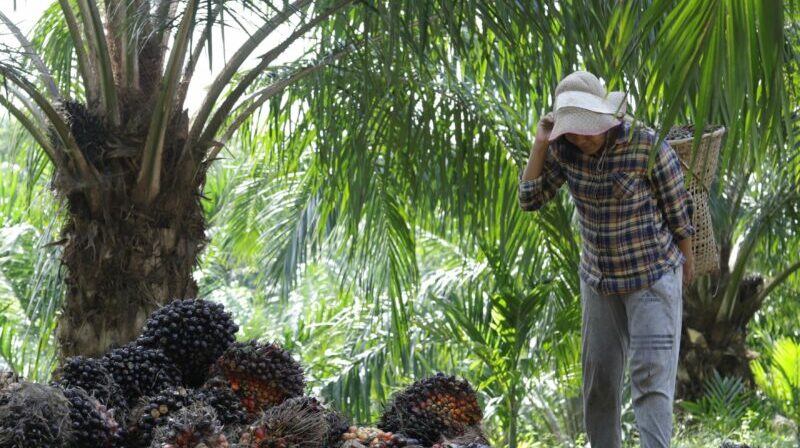 23-year-old Masseli works on her father’s farm in West Phaileng, Mizoram, every morning. She carries the palms from the farm to the trucks. Photo: Chandrani Sinha

Mizoram was the first state in northeastern India to start producing palm oil in 2005-2006, according to David C Vanlalfakawama, assistant professor at the department of forestry at Mizoram University.

“Investors like Godrej Agrovet were the first to venture into this place. But unfortunately, [the cultivation] has not helped the farmers of Mizoram as the profit earned by them through palm oil is much less than what they used to get before through traditional farming,” he told Climate Home News.

“False promises of incentives like help with production, [investments in] water storage facilities and road building were given to the farmers by the buyers,” he said.

Godrej Agrovet Limited did not respond to Climate Home News’  request for comment.

“The farmers get 5.50 rupees ($0.07) per kg of palm, it’s very little for them to sustain [themselves]. They are not at all happy. Mainly bad roads and transportation costs are problems for them. Palm cultivation also needs a good amount of water. Companies have to invest more to get a good return,” Lalremrauta said.

According to Agnes Kharsiing, a women’s rights activist in Meghalaya, the government did not carry out an environmental assessment before committing to large scale palm oil cultivation in the northeast. “There was no consultation with stakeholders and local people, nor do they care to take any advice from grassroots people. The customary ways of farming will be affected,” she said

A senior government official, who spoke on the condition of anonymity, told Climate Home News that the government plans to carry out an environmental assessment at a later stage in cooperation with state governments.

“Palm oil will no doubt bring revenue but the concern is where will it be planted. The northeast is already losing its forest cover, for example Mizoram has lost a huge area of forests,” Narayan Sharma, assistant professor of environmental  biology and wildlife science at Cotton University in Assam, India, told Climate Home News.

According to data from Global Forest Watch, Mizoram’s total forest cover decreased by 4.8%, equivalent to 123 million tonnes of CO2 emissions, between 2002 and 2020.

“I fear that a policy-driven push for palm oil expansion will lead to deforestation at a far greater rate, particularly in the community forests, where forest conversion happens completely unregulated and unchecked,” Rajkamal Goswami, research associate at the Ashoka Trust for Research in Ecology and the Environment (ATREE), told Climate Home News.

The expansion plans will “add another grave threat” to forests in northeastern India which are already extremely vulnerable to fossil fuel mining, large hydropower projects and large-scale agriculture, Goswami added.

Lal Vohbika Canon, a wildlife conservationist, told Climate Home News that palm oil cultivation is already having a negative impact on Mizoram’s biodiversity, wildlife and water quality. Most of the palm oil plantations are located in important animal corridors, such as the Dampa Tiger reserve, and the clearance of land for palm oil has led to an increase in man-animal conflict.

A 2016 study found that bird populations in Mizoram declined when natural forests were replaced by palm oil plantations. 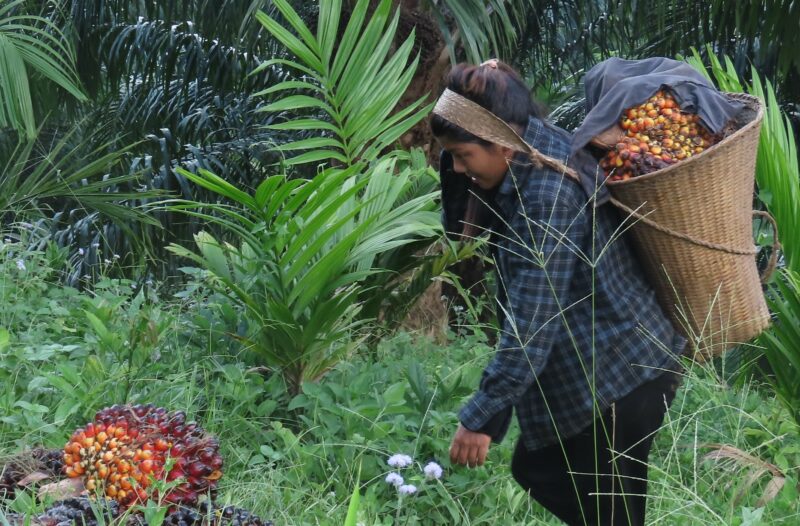 Jaydev Mandal, assistant professor of zoology at Madhab Choudhury College in Assam, told Climate Home News: “Groundwater depletion is one of the impacts of palm oil cultivation in Mizoram. Water is a major problem in most of the hilly states of northeast and palm cultivation can worsen it.”

According to a 2012 study, conversion of forests into palm oil plantations in Indonesia reduced dry season water flows, increases soil erosion and sedimentation.

Ruchika Singh, director of sustainable Landscapes and restoration at the World Resources Institute in India, told Climate Home News that the expansion plans could prevent India from achieving its forestry target under the Paris Agreement.

Forest protection and landscape restoration in northeast India alone have the potential to store an additional 1.4Mt of CO2 over the next 20 to 25 years, which would help India meet its climate goals, according to Singh.

“With the focus on domestic oil palm production, the same land identified for restoration would potentially compete with areas for palm oil expansion,” she said.

60-year-old M Mawii Lakher and her husband Malsawma Lakher shifted from cultivating rice paddies to palm oil farming in 2010 at their farm in Kolasib district, northern Mizoram. “I didn’t have any other options than to agree because the new land use has limited options left for us,” she told Climate Home News.

“If today I get this choice I will ask the new farmers not to go with it. It made me work like an animal to get the bare minimum as profit,” she said. “In the early morning I have to wake up and pick the palms scattered in the cultivation area, clean the additional weeds, cut the fruits from the tree which is the hardest and then arrange it for transportation.”

The practice of slash and burn cultivation, also called jhum cultivation, where land is cleared to grow crops and then left to regenerate after a few years, used to be integral to Mizoram’s agriculture.

But a growing population and rising demand for faster production has led to many farmers switching to monoculture crops, such as palm oil. This can be disempowering to women, experts warn.

Purabi Bose, deputy coordinator on gender at the International Union of Forest Research Organisations, wrote in a study in 2019 that an increase in palm oil plantations has impacted gender roles in Mizoram, where women’s roles became “submissive”, compared to their contribution in jhum cultivation.

Women’s roles in decision making have been curbed and the shift to palm oil cultivation has impacted customary land management practices, according to Bose. One of the major problems faced by the women in Mizoram is land titling and the fact that women do not get ownership rights, she said. 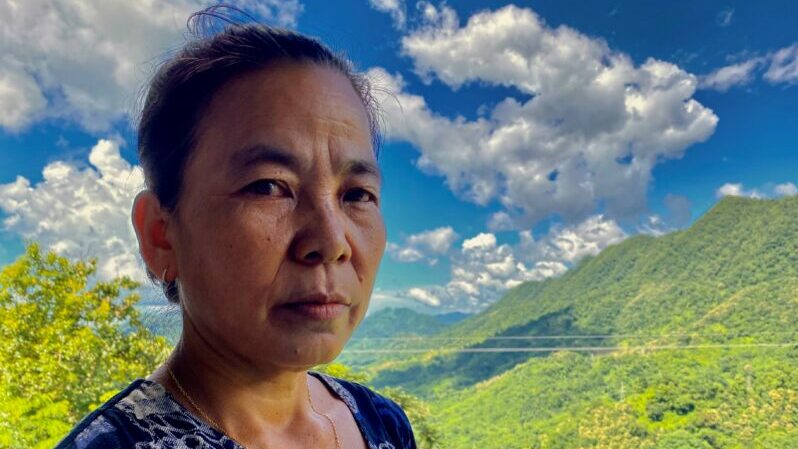 Vanlalremi Fanai, wife of H. Lalpar Thara who is a palm cultivator in Mammit, a district in Mizoram, northeastern India. Photo: Chandrani Sinha.

Nitya Rao, professor of gender and development studies at the University of East Anglia, told Climate Home News that women are disproportionately impacted by decisions to switch to commercial monoculture farming.

“In monoculture farming women are the ones who are at loss, primarily because it takes place in big chunks of lands which are mostly entitled to the male’s name,” she said. “The cash which comes from monoculture farming comes in bulk and goes to the men in the family, so there is less petty cash left for the woman in the house.”

Women who previously grew their own crops and herbs as food are now forced to depend on market products, she added.

“The men are mostly overworked and the women here participate in cheap labour like cutting, cleaning the floor of cultivation and loading the palm to transport it to the market,” conservationist Canon told Climate Home News.

59-year-old Valralemi Fanai, a farmer in West Phaileng in Mizoram’s Mamit district, told Climate Home News that over the past 10 years she has barely been able to spend time with her family because of palm oil cultivation.

“The farm has sucked away our blood and labour and in return we got peanuts,” she said.

28-year-old Sangi is worried about what the future holds. “How long do we have to work like this?” she asked. “There should be some agency to monitor women’s work in palm cultivation so that we don’t have to work this hard.”