Campaigners scored a minor victory in efforts to block consent for Cambo oil field in the North Atlantic, which they argue is incompatible with climate leadership 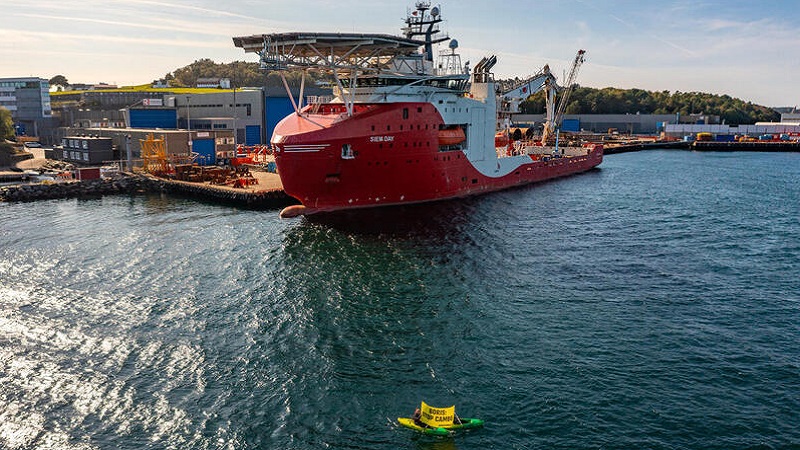 Fossil fuel firms have delayed the installation of oil drilling kit in UK waters after two Greenpeace kayakers protested next to the ship.

It is a minor victory for the Stop Cambo campaign, in what is becoming a touchstone issue ahead of the UK hosting Cop26 climate talks in November.

Campaigners argue opening any new oil field is incompatible with reaching net zero emissions by 2050, citing International Energy Agency analysis. But much hinges on the definition of “new”.

Siccar Point, which is developing the field in partnership with Shell, has held a licence for a block in the North Atlantic since 2001 and carried out test drilling in the Cambo field. It is awaiting consent from the UK Oil and Gas Authority to start full operations, aiming to extract 170 million barrels of oil.

While countries like New Zealand and Denmark have banned new offshore oil exploration, the UK government still has a policy to maximise “economic recovery” of offshore oil and gas.

Minister for Scotland David Duguid said in a statement earlier this month: “As we transition to cleaner, low-carbon and renewable energy, demand for oil and gas is declining and will continue to do so, even with new fields such as Cambo. But until that transition is made… sources like Cambo are still required.”

Any future oil and gas licences will be subject to a “climate compatibility checkpoint”, the government says, which is due to be announced by the end of 2021.

The opposition Labour Party and the Scottish government, who have no power to stop the project, have called for it to be “re-assessed”.

Offshore services firm Petrofac, whose owner has donated almost £900,000 to the UK’s ruling Conservative party, is a contractor on the project. Investigative journalists at DeSmog UK revealed the company is under investigation by the Serious Fraud Office for allegedly paying million-pound bribes to secure deals in nine countries.

On 6 August, Petrofac issued a notice to mariners saying it would install equipment related to oil drilling in the Cambo oil field.

Installation of the three CAN-ductors would start, Petrofac said, on 25 August and last ten days. On 21 August, a Norwegian-flagged offshore support vessel arrived at Randaberg harbour in southern Norway.

According to marinetraffic.com, it was scheduled to set sail for the “Cambo field” on August 25. 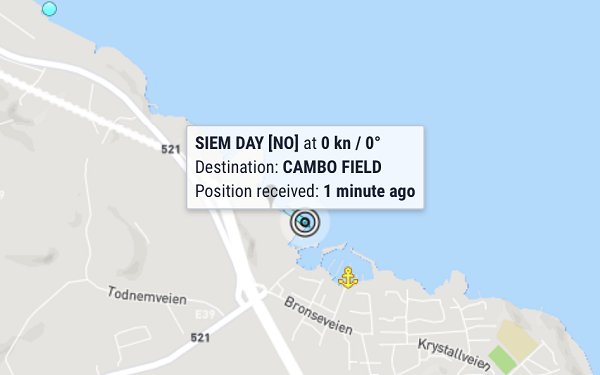 At 9.12am BST on Tuesday, vessel tracking software showed the ship was headed for the Cambo oil field (Photo: marinetraffic.com)

But on Monday, two days before departure, two kayakers paddled into Randaberg harbour and unfurled banners next to the ships.

One of the kayakers was Greenpeace campaigns consultant Halvard Raavand. He told Climate Home News: “We were protesting a supply chain that’s bringing equipment from Norway to the oil fields.

“It feels good protesting when you know that the IPCC and the UN are saying that it is clear that we can’t open oil fields if we want to limit global warming to 1.5C,” he added. 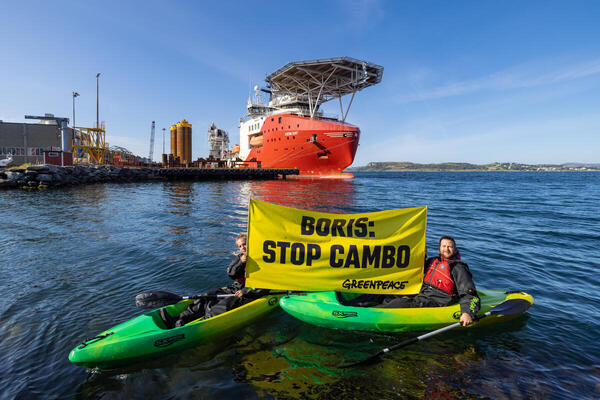 Greenpeace UK questioned not just the morality but the legality of the ship’s plans, as the UK government’s oil and gas authority has yet to decide whether to give a license to development.

Mel Evans, head of oil and gas transition at Greenpeace UK, said: “Boris Johnson must explain why an oil company is setting up shop on this massive project before a final decision on Cambo has been announced. Has his government done a secretive, backdoor deal to allow work to start before an official permit has been granted?”

Referring to the project’s main developer, Evans said: “Clearly Siccar Point don’t believe the government is agonising over the environmental implications of this decision. Johnson must stop Cambo, or he will be remembered as a climate coward.”

Siccar’s CEO Jonathan Roger said: “A separate consent for the installation of the Conductor Anchor Nodes was applied for by our contractor through the appropriate regulatory channels. This work needs to be carried out before well construction and so can legally sit out with the full field development environmental consent process. Work would only ever begin with the appropriate regulatory approvals in place.”

When asked why marinetraffic.com and the notice to mariners showed the vessel was heading to Cambo if there was no license to install equipment in Cambo, a Petrofac spokesperson said: “It is standard industry practice to apply for consent when in pre-operations phase, in readiness for installation. However work only commences once permission has been granted.”

The day after Greenpeace’s protest, the oil developers changed their plans.

Explaining the decision, Roger said: “A decision has been made to delay this until 2022 due to operational issues and given the closing weather window West of Shetland for this kind of operation.”

A decision on whether to grant consent for extraction is due soon. When the consultation closed on 10 July, the Oil and Gas Authority said it expected to decide within two months.